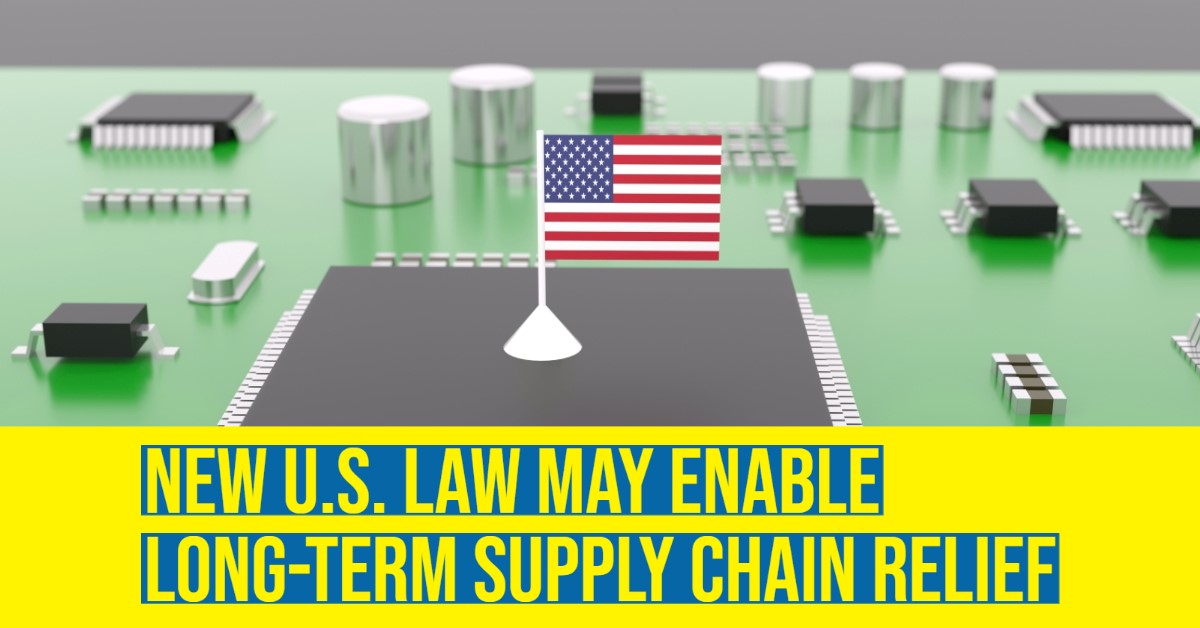 The just-signed CHIPS Act will provide $52B to fuel U.S. semiconductor production and research

In March, we asked, "Are We Getting Closer to “Locally Grown” Lighting?". Today, the U.S. may have taken one step forward in causing more semiconductors to be sourced domestically and fewer from Asian factories.

Many manufacturers in various industries, including lighting and lighting controls, are exploring an onshoring strategy to help minimize the supply chain risk of sourcing components from overseas makers. In May, Signify CEO Eric Rondolat told CNBC, "We have a global supply chain and need to go to a supply chain which is more continentally based."

According to the White House, companies are investing in America again and bringing good-paying manufacturing jobs back home. The construction of new manufacturing facilities has increased 116% over last year.

Today’s signing of the bipartisan CHIPS and Science Act of 2022, aims to strengthen American manufacturing, supply chains, and national security, and invest in research and development, science and technology, and the workforce of the future to keep the United States the leader in the industries of tomorrow, including nanotechnology, clean energy, quantum computing, and artificial intelligence.

Spurred by the passage of the CHIPS and Science Act of 2022, this week, companies have announced nearly $50 billion in additional investments in American semiconductor manufacturing.

The CHIPS and Science Act is intended to boost American semiconductor research, development, and production, ensuring U.S. leadership in the technology that forms the foundation of everything from automobiles to household appliances to defense systems. America invented the semiconductor, but today produces about 10 percent of the world’s supply—and none of the most advanced chips. Instead, the U.S. relies on Asia for 75 percent of global production.

The CHIPS and Science Act will:

These funds also come with strong guardrails, ensuring that recipients do not build certain facilities in China and other countries of concern, and preventing companies from using taxpayer funds for stock buybacks and shareholder dividends. It will also support good-paying, union construction jobs by requiring Davis-Bacon prevailing wage rates for facilities built with CHIPS funding.