2021 was a record year for port traffic and semiconductor production, and now we brace for Chinese New Year

As industries turn the calendar into 2022, the supply chain issues still continue to be a prevailing challenge that are causing lighting projects to met with delays, price escalation and widespread product substitutions.

With many months of data now in our rear view mirror, the metrics show just how significant the component demand spikes have been and how the ports have been affected.  Let’s explore two of the major pieces of the supply chain that each recently reported record years in 2021:  logistics and semiconductor demand.

Gene Seroka, Port of Los Angeles executive director, appeared on CNBC yesterday to discuss the inner workings of the ports, ships, containers and truckers.  Seroka cited progress in addressing the challenges and then warns that “we are in the midst of another mini-peak, ahead of the early Lunar New Year the first week of February in Asia.”

The Port of Los Angeles is reporting that on-shore container backlog has been reduced “by about half” since announcing penalties on long aging containers, yet the Port remains at 100% capacity.

The official public holiday of the Chinese New Year begins February 1 and lasts for seven days, but the festival celebrating the holiday is 15 days long.  It’s not uncommon for Chinese factories to be fully closed for between two and four weeks.  When factories do reopen, production is occasionally hampered with staffing challenges as some workers decide to change jobs and not return to their pre-new year employers.

A New Record: Over 1 Trillion Semiconductors Were Sold in 2021

The Semiconductor Industry Association (SIA) yesterday announced global semiconductor industry sales were $49.7 billion in the month of November 2021, an increase of 23.5% over the November 2020 total of $40.2 billion and 1.5% more than the October 2021 total of $49.0 billion.

The cumulative annual total of semiconductors sold through November 2021 reached 1.05 trillion, which is the industry’s highest-ever annual total. 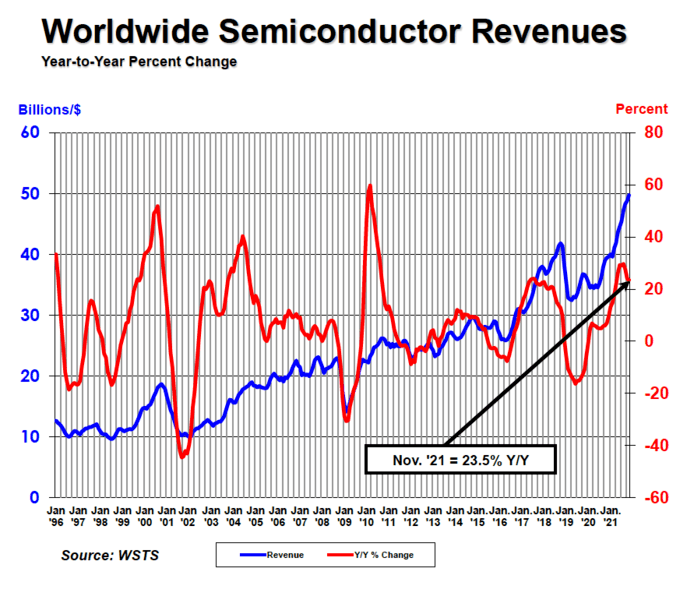