Faulty Controls Have Kept School Lights On Since 2021 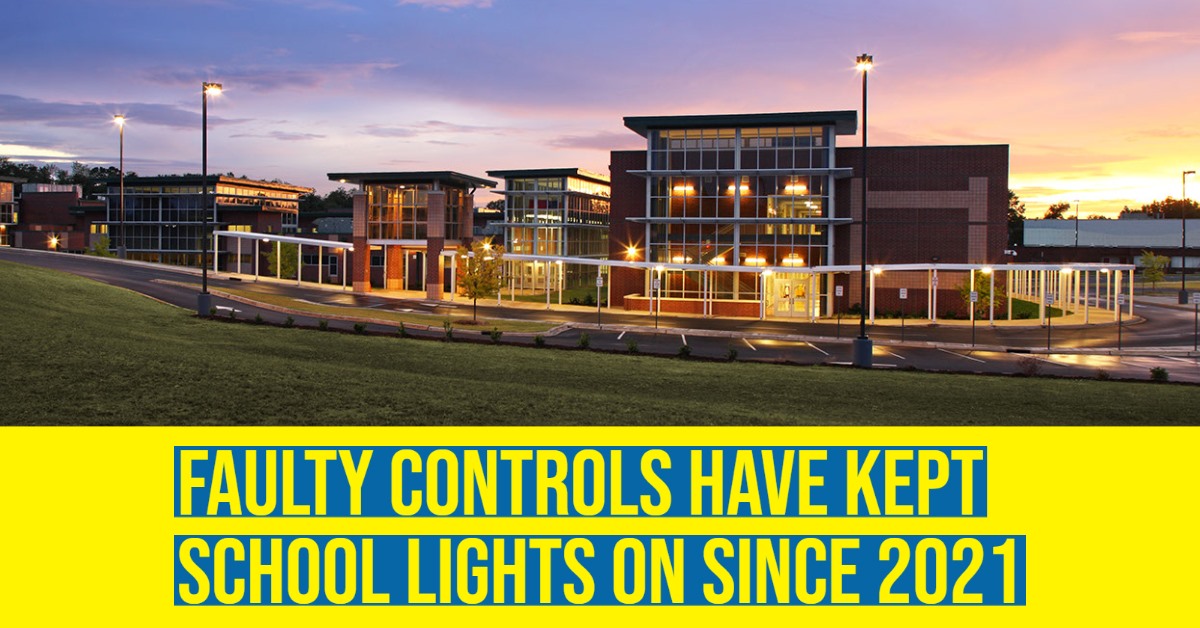 NBC News is reporting that for nearly a year and a half, roughly 7,000 lights have been lit up around the clock at a Western Massachusetts high school due to a malfunctioning lighting controls system. A software fail in 2021 made it impossible to turn them off and town officials estimate that it’s costing taxpayers thousands of dollars per month.

Minnechaug Regional High School was rebuilt in 2012 and included a first-generation software-based lighting controls system made by Fifth Light, a Canadian lighting controls company that was acquired by Cooper Lighting the same year. According to a writeup in the school newspaper by Lilli DiGrande, a power outage in August 2021 caused a failure in the lighting control system that has yet to be fixed seventeen months later.

DiGrande explained that the lights cannot be controlled due to challenges in accessing the lighting control software. “Fifth Light no longer has any of that information. They don’t have the software,” said Edward Cenedella, the Director of Facilities and Operations for the Hampden Wilbraham Regional School District, who has since retired. “The old information is proprietary, so they wouldn’t originally give it to us. Now, they say that they don’t have it and that it’s unavailable.”

Fifth Light reportedly told school officials in 2021 that the new hardware they need isn’t available because the manufacturers aren’t making the chips needed for the software. NBC News reported that in November 2021, the parts required to repair the system were ordered and the repair job was scheduled for February 2022. But the replacement main server wasn’t delivered to the Wilbraham, MA school until March 2022.

Paul Mustone, President of Boston-based Reflex Lighting Group, who represents Cooper Lighting and Fifth Light shared comments with NBC News, stating that the parts needed to replace the school’s system have finally arrived from the factory in China and they expect to do the installation over the February break.

Mustone went on to tell NBC News, “I have been doing this for 42 years and I have never seen this kind of supply chain disruption. We made a deal with the devil by moving the factories to China.”

A spokesperson from Cooper Lighting informed us that the school had a first-generation lighting system. He explained, “As soon as Reflex/Cooper Lighting Solutions learned there were issues, we built a plan to upgrade the customer to our latest generation. The upgrade will be completed in the coming weeks. The upgrade will not only restore functionality but also provide more advanced functionality to save the school even more energy.”

According to the NBC report, Reflex Lighting at one point provided school officials with a $1.2 million quote to replace the entire system. It is unclear if the estimate included labor and installation costs. We emailed numerous questions to Paul Mustone on Thursday morning and did not receive a response.

For nearly a year and a half, roughly 7,000 lights have been lit up around the clock at Minnechaug Regional High School.

A software fail in 2021 made it impossible to turn them off and is consequently costing taxpayers a small fortune.https://t.co/cUbYQcy6Di