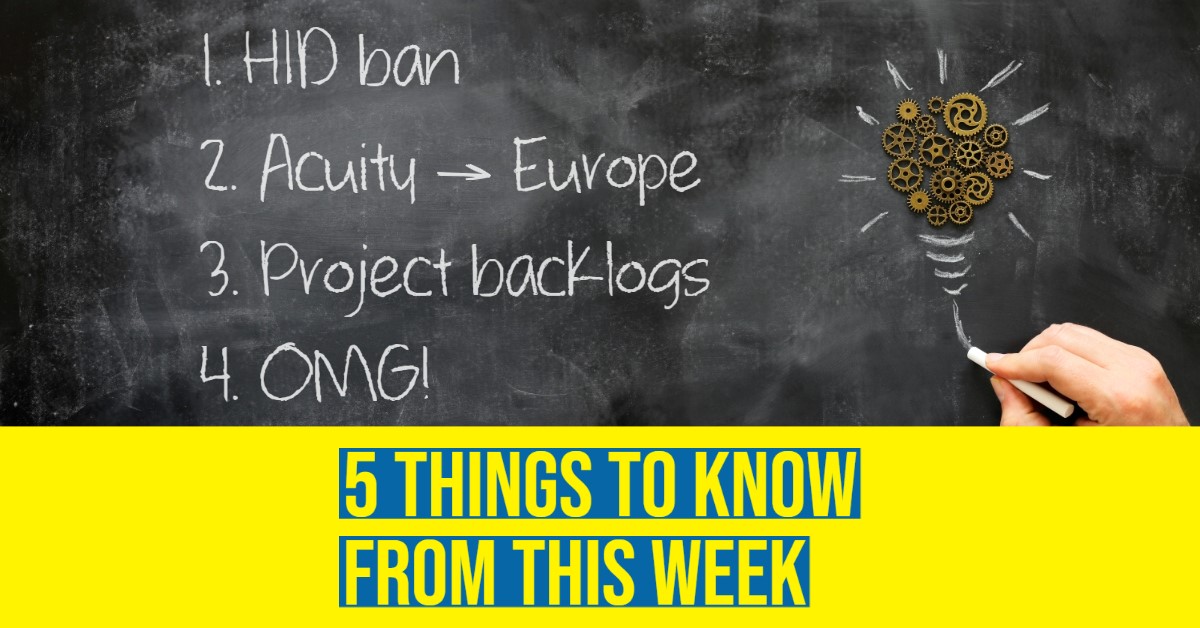 Yet another Chicago lighting market update.  Back to normal lead times?

Here's a roundup of some of the week's happenings curated to help lighting people stay informed.

Earlier this week, we were so excited to be the first lighting and electrical industry media publication to detail Canada's most recent proposed fluorescent ban, that we glossed over the fact that Canada is also eying a ban of Metal Halide and the High Pressure Sodium lamps, too.

2.  Acuity Brands seeks to "expand the geographic markets" that it serves

This week, during its first quarter earnings call, Acuity Brands CEO Neil Ashe made a notable mention of some international business in the context of controls brand, Distech.  Acuity Brands management have indicated in the past that they are not interested in shipping high bays and 8-foot architectural luminaires to Europe and Asia, but it seems that the company’s Intelligent Spaces Group is eyeing Europe and possibly other parts of the world for its Distech and Atrius lighting controls solutions.

Neil Ashe on Monday:  “Our Distech product portfolio of controls and sensors is winning in the marketplace, largely in North America and France, and it has broader applicability. Therefore, we are focusing on increasing the addressable market for Distech. The first step is expanding the geographic markets that we serve. This effort is off to a promising start in the U.K. We are assembling the right group of independent systems integrators and are already delivering customer wins, including a large multi-million-dollar multi-year contract.”

“In October, I was in Europe and had the opportunity to visit a large mixed-use construction site in Lyon, which was using a full suite of our Distech products to control the entire space. This installation is a great example of the power of a full Distech implementation with HVAC, lighting and shade control throughout all areas and for all tenants of the space. We look forward to continuing our market penetration in France, while we grow in the U.K.”

Construction backlog remains at its highest level since the second quarter of 2019. This has been especially true in the South, which has been the case for many of the past several years.

“Contractors enter the new year with plenty of optimism,” said ABC Chief Economist Anirban Basu. “Backlog remains elevated, which means that, even if the economy were to enter recession this year, contractors would likely be insulated from significant harm. Rather than fixate on the possibility of a recession, many contractors remain focused on growth, with expectations for rising sales and staffing levels over the next half year. Even the reading on profit margins increased this month, perhaps reflecting an improved supply chain.”

4.  Back to Normal Lead Times?

Feedback from various North American lighting and controls makers is that supply chain challenges have eased, but lead times are still prolonged compared to pre-pandemic times.

This week, lighting controls maker Casambi issued a memo to its North American business partners indicating that lead times have returned to 2-3 weeks, as they were before the pandemic.  This is notable as Casambi’s products rely heavily upon microprocessors, which we still understand is an issue for other companies that rely on similar components.

This is unintentionally becoming a weekly feature: