Shakeup in the Chicago Lighting Market 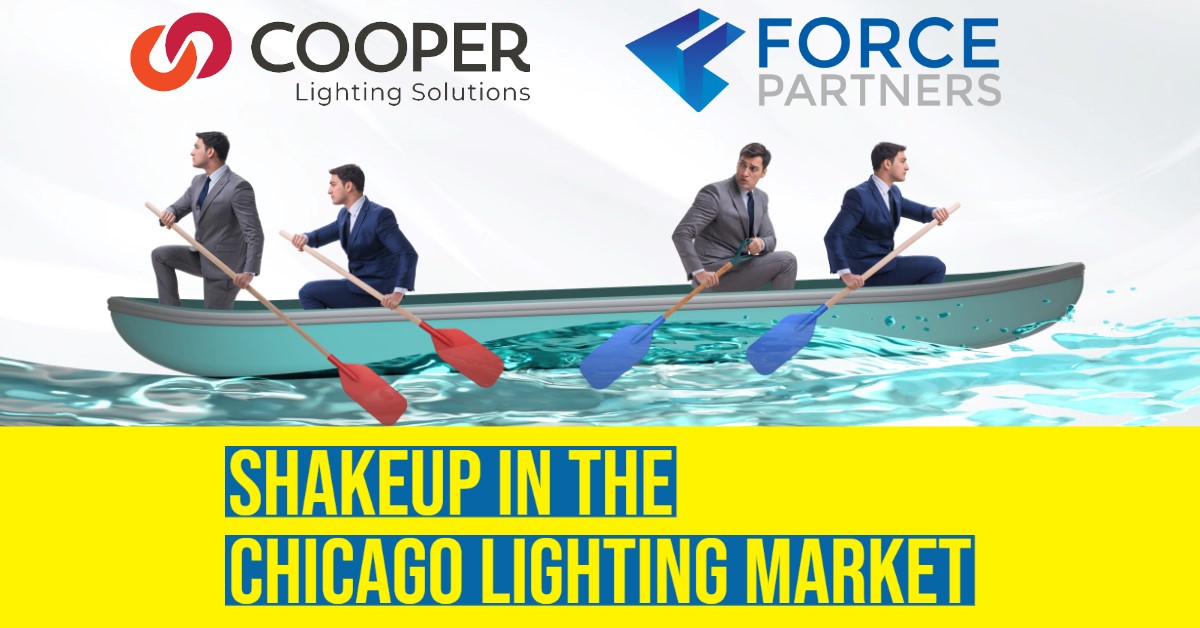 Cooper Lighting and Force Partners part ways. Next moves to be announced in coming days and weeks.

On January 16, 2017 a startup lighting agency named Force Partners stepped into the Chicago marketplace and was essentially put into business by becoming the new agent to represent Eaton’s Lighting Division – now known as Cooper Lighting Solutions – in the Northern Illinois and Northwest Indiana marketplaces.

Today, both Force Partners and Cooper Lighting Solutions issued separate, coordinated statements announcing that the companies will be ending their business relationship and going in separate directions. This is not a termination; the companies will not be renewing the existing representation agreement.

On the surface this seems like a pretty friendly parting of the ways. It probably is. We detect no bad blood between the two companies. Yet as we keep our ear to the Chicago market and understand that the terms “jointly” and “mutual” were used to describe the decision to split, it causes us to wonder if both parties indeed made the decision or if one company really initiated the change.

The coming days and weeks will be telling:

Each company letter that was sent to the local market indicated that both Cooper and Force will each be announcing more plans in the near future. Initially it’s hard recognize a no-brainer landing spot among existing Chicago lighting agents for a big brand like Cooper Lighting in a big market like Chicago. KSA Lighting + Controls is seemingly firmly entrenched with Acuity Brands as the market-leading agent. PG Enlighten’s move away from Eaton (Cooper) in 2016 was one of many moves in Chicagoland that shook the market that year. Is a reunion possible? Yes. Unlikely? Yes, as well.

Will Cooper Lighting Solutions move to the Genlyte agent, Chicago Lightworks? That seems doubtful too, as Cooper and Genlyte are sister companies under the Signify umbrella. Just like Gibson’s Bar & Steakhouse wouldn’t want to cause harm to sister restaurant Hugo’s Frog Bar or morph into one restaurant with Hugo's Frog Bar, it seems unlikely that we will see a Signify-on-Signify agent poach or consolidation take place in The Loop.

What about A&M (Archibald & Meek)? Illumination Technology Group? Vertical Lighting & Controls? We suppose that anything is possible, but any of those smaller reps would certainly need to bolster their staff to represent a large, broad line like Cooper.

We have no inside information, but we believe that the decision to not renew was initiated by Cooper and will cause Cooper to announce something that will show more advance planning and complex moving parts than whatever announcements Force Partners will share next week.

Force Partners co-Principal, Brian Dauskurdas, is a former Lutron employee.  That, in part, is causing local speculation about Force Partners possibly joining forces with the worldwide leader in lighting controls. Lutron is historically deliberate in taking its time to interview almost every agent in town before making an agency change, but with their current agent, Archibald & Meek (A&M), going through some ownership and key personnel changes in recent years, it makes us wonder if a Force-Lutron partnership is a possibility.

It's been two months since it was announced that Lutron was splitting with its Atlanta agent. After multiple territory visits by Lutron execs and a “fly the agent finalists to Lutron HQ” bake-off, Lutron hasn’t yet announced a new Atlanta agent, but is expected to do so next week.

We share this long Lutron preamble to state that if Force Partners announces in the coming days that it is teaming up with Lutron, that may indicate that the parties were talking and negotiating for a long time leading up to today’s Force/Cooper announcement. We can’t imagine Force initiating a split with Cooper without having another large-revenue line in their back pocket.

If Cooper Lighting Solutions announces a new agent representation plan that involves multiple other agents, in territory, out-of-territory and/or key agent personnel from competitors, that’s a sign that they were working behind the scenes for a while to put together their next agent team.

It seems that it’s in both Force Partners’ and Cooper’s best interest to promote the “mutual parting of the ways” messaging. That will cause future potential factory partners to not perceive Force Partners as a Cooper castoff while also causing Cooper to not be labeled as a strong line that was left by two different Chicago lighting agents in six years. The real truth has likely been discussed in conference rooms and Zoom calls that involved only a select few people. The rest is speculation and hearsay.  (We're obviously guilty of speculation in this article.)

Force Partners has been a popular topic of conversation for the last couple years due to the agency launching a remarkable lawsuit against competitors KSA Lighting + Controls and Acuity Brands.  As the agency navigates through the arduous lawsuit, they will also need to pivot their business for a new look in 2023.

We think some of the second-order effects will surprise locals

We didn’t predict that Tavern on Rush would recently close after being a 25-year staple on Chicago’s Gold Coast. And we didn’t predict this “mutual parting of the ways” between Force Partners and Cooper either. So if next moves involve local agents, out-of-town agents, local agent people leaving in a coordinated effort, big lines moving to Force Partners, we are braced for it. Time will tell. Thinking about all the possibilities gives us more heartburn than a Portillo’s Polish sausage does. But it’s almost always worth the heartburn. Stay tuned.