Light at Night Linked to Increased Risk of Diabetes 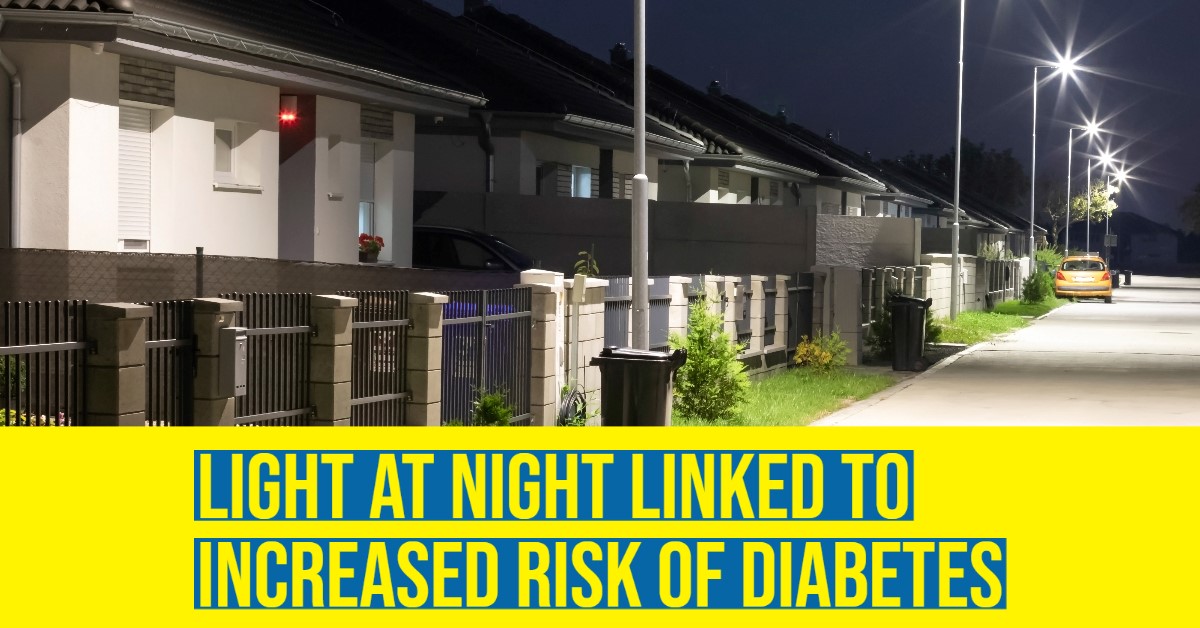 A new study published in Diabetologia (the journal of the European Association for the Study of Diabetes [EASD]) finds that outdoor artificial light at night (LAN) is associated with impaired blood glucose control and an increased risk of diabetes, with more than 9 million cases of the disease in Chinese adults being attributed to LAN exposure. The study is by Dr Yu Xu and colleagues at the Shanghai Institute of Endocrine and Metabolic Diseases, Ruijin Hospital, Shanghai Jiaotong University School of Medicine, Shanghai, China.

Exposure to artificial LAN at night is a ubiquitous environmental risk factor in modern societies. The intensity of urban light pollution has increased to the point that it not only affects residents of big cities, but also those in distant areas such as suburbs and forest parks that may be hundreds of kilometres from the light source. The authors note: “Despite over 80% of the world’s population being exposed to light pollution at night, this problem has gained limited attention from scientists until recent years.”

Earth’s 24-hour day-night cycle has resulted in most organisms, including mammals, having an inbuilt circadian (roughly 24-hour) timing system which is adapted to the natural sequence of light and dark periods. Light pollution has been found to alter the circadian rhythm of insects, birds and other animals, resulting in premature death and loss of biodiversity.

Artificial LAN has also been implicated as a potential cause of metabolic dysregulation through altering the timing of food intake. Rats exposed to artificial LAN developed glucose intolerance, exhibiting elevated blood sugar and insulin. Another study found that mice exposed to nocturnal dim white light of minimal brightness for 4 weeks had increased body mass and reduced glucose tolerance compared to animals whose environment was completely dark at night, despite having roughly equivalent energy consumption and expenditure.

Associations have also been found between artificial LAN and health problems in humans. A study of night-shift workers found that those exposed to brighter LAN were more likely to have disrupted circadian rhythms, as well as a greater risk of coronary heart disease. Other research found that higher LAN exposure was associated with a 13% and 22% increase in the likelihood of being overweight and obese, respectively, while exposure to LAN in the bedroom was reported to be positively associated with the development of diabetes in elderly people.

The potential impact of outdoor artificial LAN was revealed by a study in South India which used satellite images to map light pollution and compared this with data on general health markers among adults across the region. With increasing LAN intensity, there were corresponding rises in average body mass index (BMI), systolic blood pressure and ‘bad’ (LDL) cholesterol levels in the exposed population.

Diabetes is a critical public health problem in China, and the onset and progression of the disease is largely governed by behavioural and environmental risk factors. The nation’s rapid urbanisation and economic growth has resulted in a dramatic increase in urban lighting, and the number of people exposed to it. Those living in cities are prone to being shifted away from a natural 24-hour day-night cycle, to one of round-the-clock working and leisure time, often staying out late and being exposed to artificial LAN.

The study used data from the China Noncommunicable Disease Surveillance Study; a representative sample of the general population in China taken in 2010 across 162 sites across the country. A total of 98,658 adults participated, undergoing interviews to collect demographic, medical, household income, lifestyle, education and family history information. The mean age of participants was 42.7 years and around approximately half were women.

Body weight and height of participants were measured to calculate BMI, and blood samples were taken to obtain levels of both fasting and postprandial (after meal) serum glucose, as well as glycated haemoglobin (HbA1c). This is a form of glucose bound to haemoglobin in red blood cells which acts as a moving average of blood sugar over the previous 8 to 12 weeks.

Participants at each study site were assigned an average artificial outdoor LAN exposure level for that location using night-time low-light image data of the Earth’s surface from the US Defense Meteorological Satellite Program (DMSP). Exposure levels were ordered from lowest to highest and grouped into five quintiles (groups of 20% from highest to lowest), with the median light intensity in the highest quintile being 69 times greater than in the lowest.

The intensity of outdoor LAN varied substantially across China, with most areas being exposed to low intensity light, while higher intensities converged on the Eastern coastal cities. Participants living in areas in the higher quintiles of outdoor LAN were more likely to be older, have a higher BMI and household income, and live in an urban area. In contrast, those in the lower quintile areas reported higher levels of physical activity but fewer years of education.

The study found that the highest quintile of LAN exposure was associated with a relative increase of 28% in the prevalence of diabetes than in the lowest quintile areas. Chronic exposure to residential outdoor LAN was positively associated with blood glucose levels, insulin resistance and diabetes prevalence, and inversely associated with beta cell function, even after adjusting for many important diabetes risk factors. On average, for every 42 people living in regions in the highest quintile of LAN exposure, there is one more case of diabetes that would not have occurred if those individuals had been living in areas in the lowest quintile. While the association between LAN exposure and diabetes might not be as strong as with better known risk factors, the ubiquity of outdoor artificial light means that the scale of population exposure is vast.

The researchers estimated that more than 9 million cases of diabetes in Chinese adults aged ≥18 years could be attributed to outdoor LAN exposure; a figure expected to increase with accelerating urbanisation and the growing number of people migrating from China’s countryside to its cities. The global nature and scale of this problem is illustrated by the fact that an estimated 83% of the world’s population and more than 99% of those in the US and Europe live under light-polluted skies.

These findings contribute to a growing body of evidence suggesting that LAN is detrimental to health and demonstrate that it may be a potential novel risk factor for diabetes. The authors conclude that “further studies involving the direct measurement of individual exposure to LAN are needed to confirm whether its relationship with diabetes is a causal one”.