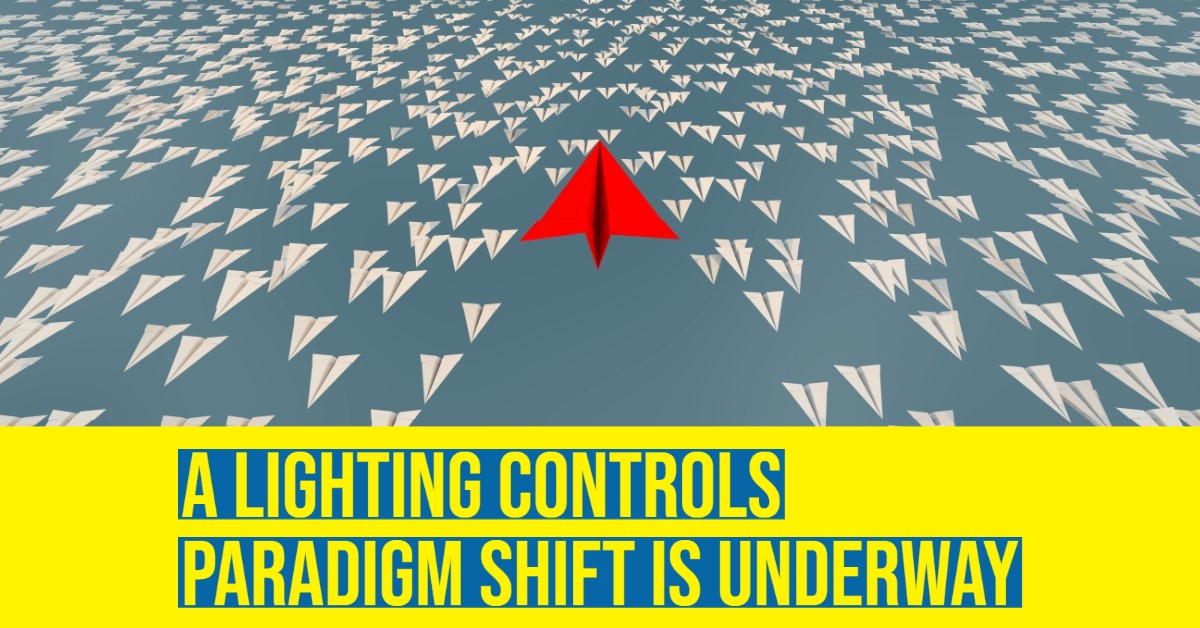 "Will you resist the change or adapt to new technology?"

In a recent episode of Get a Grip On Lighting Conversation Series, a podcast series that I record with my co-host Ron Kuzmar, we interviewed Norman Russell from NV5. The conversation focused on how lighting controls design has changed and when this change transpired. Norman suggested that a change to lighting controls design happened when control systems started communicating with luminaires via alternative signals, such as with DMX512 or 0-10V systems, in lieu of phase dimming. This change facilitated more advanced controls solutions, which is altering the landscape of lighting control systems. Many designers, manufacturers, and contractors are resisting this change, however, and it appears as though we are headed towards a third paradigm shift that will sustain those who adapt and eliminate those who don’t.

The original control scheme
At the outset, electric lighting controls began with a simple axiom: lighting can be On or Off. This was often via a light switch or a relay that would control groups of luminaires that shared the same circuit. Power to the luminaires was cut off by physically severing the circuit feeding the luminaires. While this principle doesn’t address the details for how the lighting is On or Off, it was common to assume that control groups (zones) shared a power circuit.

Controls evolve
Eventually, a new axiom was introduced with the innovation of dimming controls. No longer was it just On or Off, but it was also: lighting can be brighter or dimmer. This new truism still relied on the same principles of the first axiom, in that zones shared the same circuit and were switched and dimmed together, and it was still a very expensive option to provide individual control of each luminaire. Like the first axiom, this doesn’t say how luminaires are dimmed, just that they can be. At the outset of this new principle, phase dimming was the most popular option available, which used the power feeding the luminaires to also dim them.

Another moment of change
Through our conversation with Norman, it became clear that we are now in another moment of change with a new axiom: lighting can be static or dynamic. Traditional dimming systems would only be able to adjust the brightness of a static white luminaire, but luminaires today are no longer just static white. Luminaires can be color changing, tunable white, or dim to warm. Whether it’s a trend or not, dynamic color control capabilities are currently in a phase of growth and their controls needs are much more advanced than their predecessors.

Dynamic lighting was not possible when luminaires were shackled to each other via a shared control circuit or dependent on phase dimming, but nowadays luminaires don’t have to be controlled synonymously with the circuit or dimmed with their own power source. Luminaires can now be circuit agnostic, which means that luminaires can be controlled individually even when they share the same circuit, and they can have multiple attributes, which means that they have different independently controlled colors or functions. Because of this new relationship with circuits, light fixtures can be used for unrelated applications such as collecting and monitoring building data.

These new axioms throw out a lot of the traditional assumptions about lighting controls and introduce a whole new paradigm for the industry to consider. This new paradigm has a great amount of friction with those who are resistant to change and my heart goes out to those who want to keep the status quo. But many people have made the argument that those who rigidly hold on to the “old ways” will fade away and be replaced by those who adapt, because the benefits of the new technology far outweigh the time and effort in learning how to specify and use them.

Smartphones were once a rarity that people refused to adopt because they were new, unfamiliar, and incredibly expensive, but now it is hard to find people, in the modern world, without a smartphone. Looking through this lens, we can see the parallels in our own industry. NLCs are the smartphones of lighting design, but we are currently still discovering how they fit into our lives. It’s clear that they can improve people’s lives, for instance: touchscreens can dynamically change so that we can interact with a building in real-time (and not just with its lighting), sensors can be used with lighting to provide a comfortable environment while ensuring optimal building and energy use, intelligent lighting controls give us the ability to pick whatever color of light we want, and we can check the status of our lighting from anywhere including our smartphones. These features have never been possible before and it is unlikely that they will disappear, rather they will probably change and become more complex to meet the demands of a growing high-tech world.

Lighting controls design work is not the same as it was and so the question I am asking you is: will you resist the change or adapt to new technology?

Adapting to this new perspective won’t be easy, in fact it will take a lot of effort. Modern controls are more complex than they have ever been but, much like how people accommodated going from switching to dimming, the benefits outweigh the costs. Early versions of dimmers were marketed as energy-saving devices, but modern lighting design relies heavily on the ability to dim luminaires and this change took time, effort, and a rethinking of how to work with lighting. Similarly, changing our mindset to accommodate dynamic lighting, instead of just meeting “code minimum,” will also take time and effort, but arguably it will be worth it and will improve the success of future lighting designs.

Thanks to new controls systems we can think bigger when it comes to lighting design, but big ideas can’t emerge if we adhere to the comfort zone where complex control systems are thought of as an “add-on” feature. I implore you, for the betterment of the industry, start thinking about lighting with these new axioms that lighting can be dynamic and circuit agnostic.