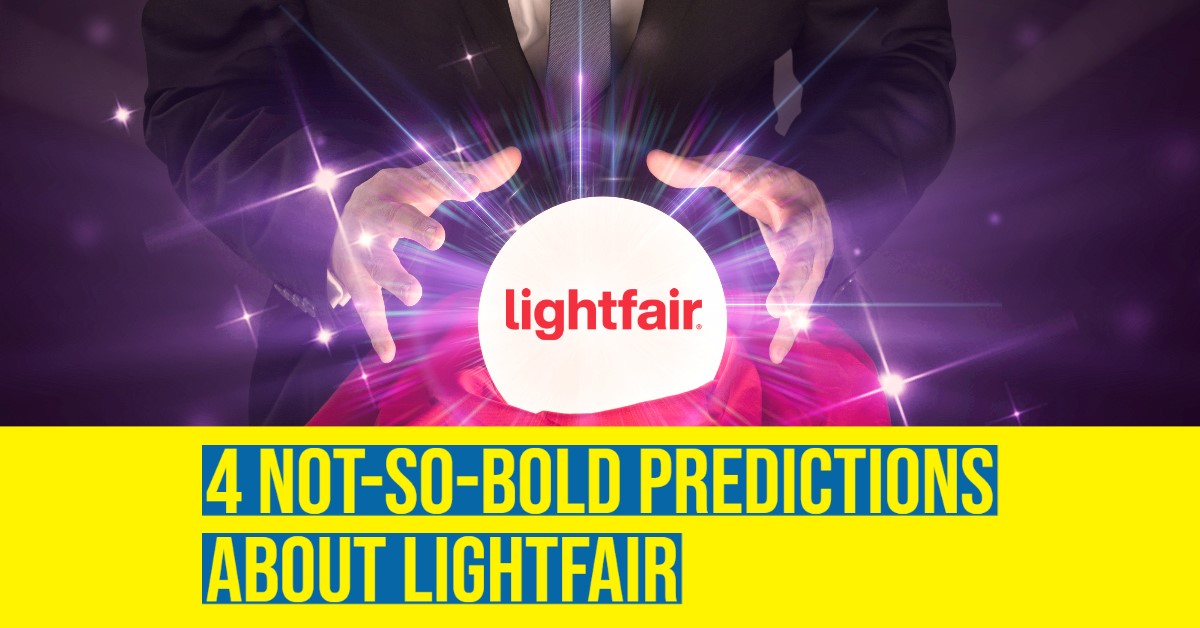 Next week’s show will impact the trajectory of LightFair, and we believe it will be positive

The pandemic’s impact on live events has been profound. Almost all in-person events have experienced setbacks and changes over the last couple of years. Conferences, trade shows, sporting events, concerts, theater and many, many other venues have endured uncertainty and challenges.

Sports fans have returned to stadia and arenas. Theatre lovers are donning their required masks and returning to Broadway, albeit in slightly lower numbers. But business conventions and trade shows in all industries seem to be experiencing a slower rebound. And you are likely aware of the many reasons behind the prolonged recovery.

Next week, LightFair returns to Las Vegas for the first time since 2014. Here are four not-so-bold predictions for the upcoming event:

1. Whatever people think about LightFair going into LightFair, they will be right

The naysayers who aren’t going to LightFair 2022 can compare the event to pre-pandemic Lightfair events by pointing to the shorter exhibitor list and the expected smaller crowds. And they will be right. The numbers will be smaller compared to past years.

The naysayers will question the notion of a 2-3 day trip away from the office for lighting education, when they can get free CEUs on demand any time they want. And yes, webinars and CEUs are plentiful.

But when masked attendees and exhibitors left the much smaller and much different LightFair 2021 in New York City, there was a wide-sweeping reaction of people being glad they attended. They were rewarded in many ways, based on what their objectives were – and that is likely why a high percentage of exhibitors are returning just 7 ½ months later for the 2022 event.

The attendees and exhibitors who are in Vegas next week will each arrive with their own expectations and goals. We believe that attendees will leave with positive sentiments for many reasons including:

We predict that most attendees’ experiences will cause them to be somewhere between “satisfied” and “very pleased” with LightFair 2022. Ditto for exhibitors.

When our business social media feeds get flooded with “best wishes” messages around various holidays, it can begin to feel repetitive and unproductive. Most people don’t hop on LinkedIn or Instagram in November to see an endless stream of cornucopias and turkeys that bring little value.

Many lighting industry companies were late to the game in developing a robust social media strategy and presence, but we expect many marketing-savvy lighting companies – both exhibitors and attendees – to have a multi-channel approach that will bring their Las Vegas LightFair experiences to the many lighting people who aren’t in attendance. Unlike some unimaginative holiday posts, social media posts from live events attract lots of interest. Videos and any photos that highlight people as much as product/brand will drive high engagement and also a fear of missing out (FOMO) that will likely build momentum for future shows.

A wave of positive LightFair publicity next week combined with positive reviews from those who attended will cause many lighting people to come off the sidelines and be a part of LightFair 2023 in New York City next May.

3. Economic pressure will slow LightFair’s year-over-year growth, but it will still grow

It’s likely that most top executives who manage large marketing budgets for LightFair exhibitors were conducting business during the last great recession in 2009 when many companies experienced revenue drops of 15-20% or more.

Many credible economists predict that we’re heading for another recession, and if that’s true businesspeople will once again trim marketing and travel budgets. Non-exhibitors may sit out another year of LightFair, and current exhibitors may scale back their booth’s size and extravagance for 2023. Far away design firms might hold off on sending its specifiers to the event.

So if we are headed for some challenging economic times, will a six-figure investment into LightFair 2023 make the cut? For many yes, for some no. But the show will go on and continue to grow.

4. The “Support the IES & IALD” drumbeat will become louder

Before the pandemic, the Lightfair revenue share for each party was over $3 million each – but the absence of events and their accompanying revenues have caused financial challenges for both the IES and IALD.

We expect to see some of the more influential lighting industry leaders – mainly those who are prominent specifiers – start to campaign manufacturers for more involvement in the largest North American lighting industry event that also funds a good portion of two super-important industry organizations. We aren’t predicting a complete return of Acuity Brands, Lutron, Legrand and Lumenpulse – but we would expect to see at least two of those four return for 2023, whether they are nudged by highfalutin specifiers or not.

As a wish – and not a prediction – we would also like to see a more deliberate internal campaign among prominent IES and IALD specifier members to encourage more fellow lighting design professionals to invest in future LightFair attendance. If the manufacturers are going to build 600+ square-foot booths, they will be banking on the design community to come experience them.