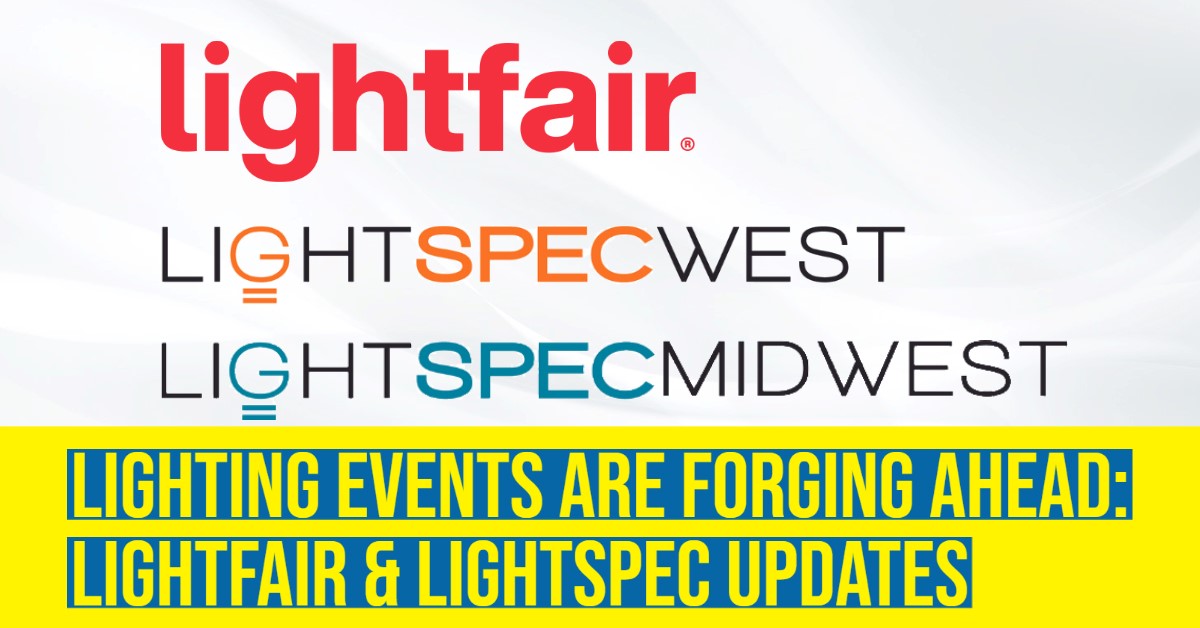 Support is definitely growing for live events, but Lighting People seem to be picking their spots

Seven weeks from today, lighting people will be scurrying though the aisles of the Las Vegas Convention Center during LightFair 2022. Anyone who is paying attention knows that the climate for live business events in 2022 is considerably different than it was pre-Covid. So event organizers, exhibitors and participants are seemingly approaching events with adjusted mindsets and expectations.

Here is a rundown of some events that will be making waves over the next five months:

The 2021 event in New York City was just over six months ago, but it’s been six years since the last West Coast LightFair – San Diego 2016 – so we are eager to see how many regional lighting people rally and return. The last LightFair to be hosted in Vegas was in 2014. Some of us are still recovering.

The October LightFair had just over 200 exhibitors, and currently, the LightFair 2022 website is showing 310 booths. But the increase in exhibitors isn’t the only important metric. Average booth size is expected to rise significantly, too, with over 100,000 square feet of actual booth space this year.

Many exhibitors exercised an option to downsize their 2021 booth to maintain their good standing in the Lightfair exhibitor pecking order. Some well-known brands exhibited in uncharacteristically smaller booths, in some instances without displaying actual lighting and controls products. This year, those exhibitors are back, with much bigger spaces that will be filled with products many of us haven’t seen in person over the last three years. Plus, Current will be revealing its new branding for the brands formerly known as GE Current and Hubbell Lighting.

We are starting to hear some real enthusiasm for the upcoming Vegas event. A principal of HLB Lighting Design recently informed us that multiple designers from multiple offices across the U.S. will be attending LightFair. A local lighting agent in Vegas expressed feedback that the local market will be enthusiastically attending and that many out-of-town lighting people are reaching out to coordinate visits. Feedback out of Southern California and Arizona is mixed, but trending more positive than negative.

The absence of some major exhibitors including Acuity Brands, Legrand and Lumenpulse seems to be having a bit of an impact on the number of lighting agent attendees and how many customers the lighting agents will be bringing to Vegas.

Conventional wisdom is expecting LightFair 2022 to be noticeably larger than LightFair 2021 in both attendees and exhibit space, but still not near the levels of 25,000+ person pre-pandemic events.

Two new events, LightSPEC West and LightSPEC Midwest will have inaugural events in Fall 2022. The events are owned by Endeavor Business Media who, in 2021, purchased the assets of the now-defunct LightShow West and LED Specifier Summit.

LightSPEC West is scheduled to take place September 21 - 22, 2022 at The Reef in DTLA – the same location that hosted the IES Los Angeles Product Show in February. LightSPEC West revealed their initial exhibitor list last week with over 80 exhibitors listed – and that number is now over 90. Impressive.

LightSPEC West is giving early indications that it may fill most of the void left by the popular and longstanding LightShow West. Some Los Angeles lighting agents seem to prefer hosting their own agency events and may throttle their support of LightSPEC West.

LightSPEC Midwest, which is scheduled to take place at Chicago’s Hyatt Regency on October 4th and 5th, is a different story. Chicago’s LED Specifier Summit was one-day event with a 7-year history. It lacked the legacy and popularity that LightShow West had in Southern California – so LightSPEC Midwest is seemingly filling a comparatively smaller void. LightSPEC Midwest revealed its preliminary exhibitor list this week citing just 16 exhibitors.

LightSPEC Midwest will also be competing with another popular Chicagoland lighting event that is scheduled for the prior week on September 29 when KSA Lighting & Controls will host its large and legendary product showcase. After a long streak of annual jam sessions and cocktails at the House of Blues, KSA’s 2022 event is scheduled to take place at Soldier Field. Lighting. Controls. Cocktails. And an evening concert. Some Chicago lighting people might possibly consider the KSA Lighting & Controls Product Showcase to be the most exciting event to take place at Soldier Field this September.