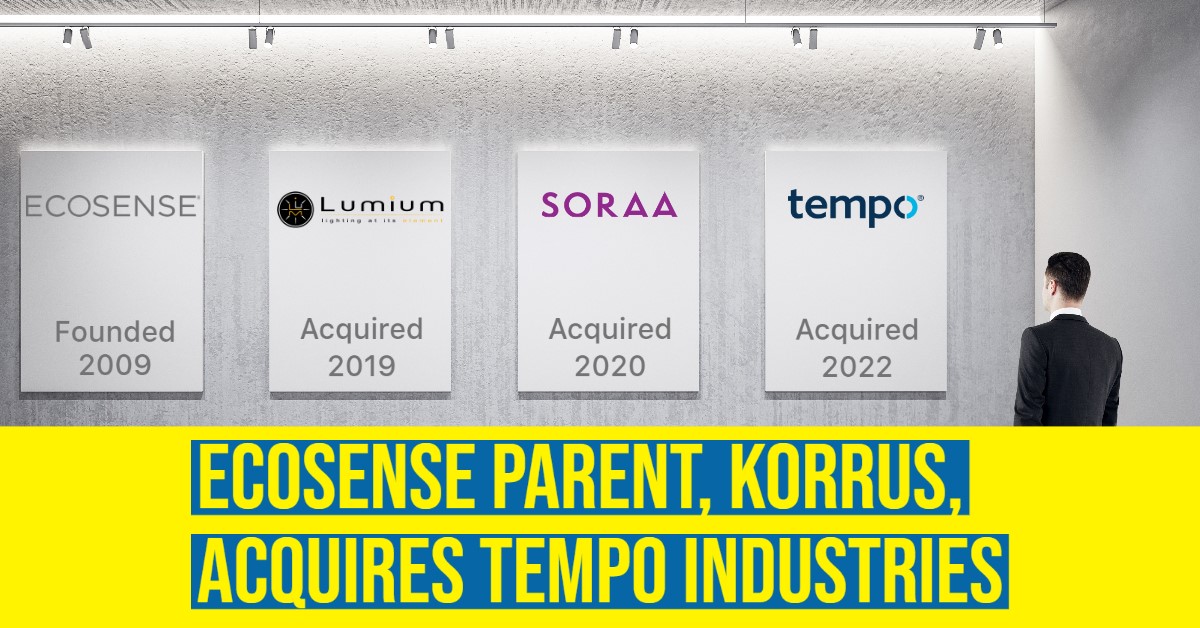 Korrus, the lighting group that includes Ecosense and Soraa, has acquired architectural lighting manufacturer, Tempo Industries. Terms of the transaction were not disclosed.  Mergers & acquisitions advisors, Merrimack Group, represented Tempo in the transaction.

In 2020, Tempo Industries reported having 72 U.S. employees. Tempo President, Michael Bremser, will reportedly remain as President of Tempo and will continue to lead the organization in Irvine, CA. Both Korrus and Ecosense are headquartered in nearby Los Angeles.

Statement from Korrus (via Tempo):
“We’re excited to integrate Tempo, and the talented team there, into our Korrus ecosystem. Like other Korrus brands, Tempo touts an impressive product line and a strong National Accounts presence in the marketplace and we believe that integrating Korrus’ patented, next generation lighting technologies into Tempo products will significantly increase their value proposition, and enable us to grow Tempo as an independent and complementary, Korrus-integrated brand.”

After the Lumium and Soraa acquisitions, there was eventual widespread agent consolidation that saw all three brands move to one common lighting agent in nearly all U.S. and Canadian markets.

Lighting Agent Sales Forces are Remarkably Unaligned (but that could be okay)
With Tempo likely being the largest company acquired by Ecosense/Korrus, the company may take a different approach than it did with Lumium & Soraa, and cause Tempo to act more autonomously. As we evaluate our Top 20 U.S. & Canada markets, we find only two markets where Ecosense and Tempo already share a common agent – Detroit and Minneapolis.

Given the remarkable lack of overlap between the two agent sales forces, we predict that Ecosense and Tempo will not hurriedly consolidate agents. Given the long sales cycles of specification project business, such a move could immediately weaken many of the strong local markets for Tempo. A less disruptive approach might be to enable brand autonomy and establish an ongoing process of evaluating locales with lower market share.  A real-time example of this theory is in Pittsburgh and West Virginia, where Ecosense is reportedly in the process of moving to Laface & McGovern.  Tempo has long been aligned with ALS and Kimball in those markets.

Neither Korrus nor Tempo shared comments on agent strategy, but we look forward to watching how the agent strategy eventually unfolds.

NOTE:  This article was updated at 12:24pm EST to cite that Merrimack Group represented Tempo in the transaction.