How To Be An Ally 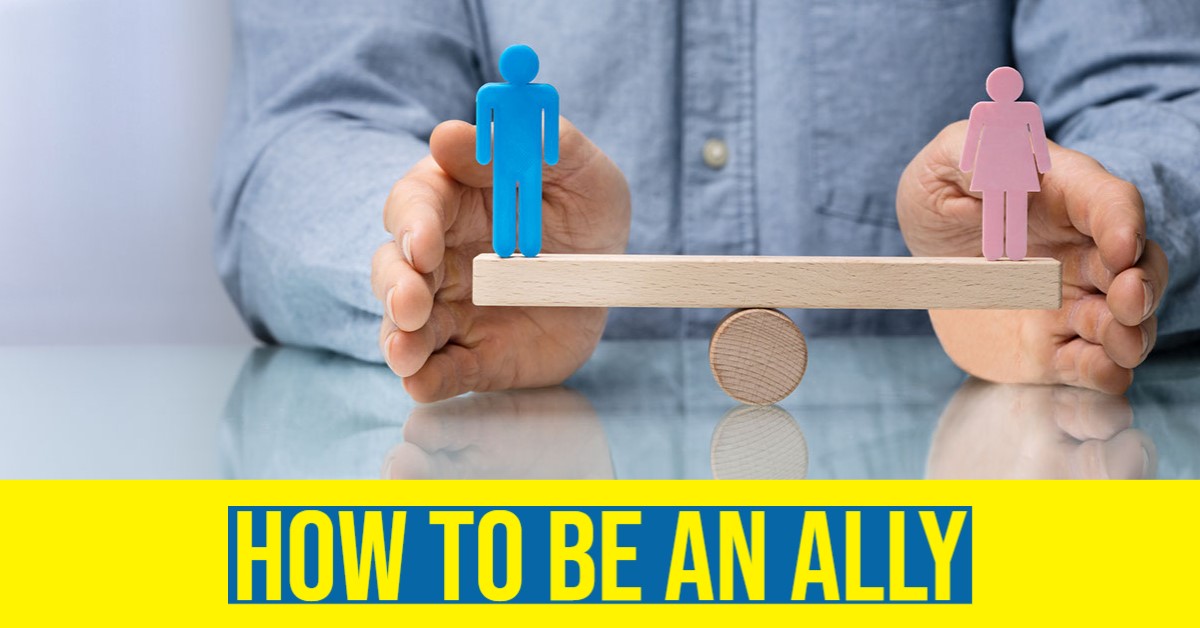 Following Carmela Dagnello’s research into gender equality in the lighting industry, Neil Knowles, Director of Elektra Lighting and Male Supporter of Women In Lighting, offers some advice to men in the industry on how to be better allies.

Do you have a penis? Read this article.  The deserved success of the Women in Lighting project has left a lot of men standing on the sidelines thinking “what can I do? How can I help?" Fear not! Below is your handy cut-out-and-keep guide to How to be an Ally.

This article is addressed to men, and phrased accordingly.

What is an ally?

Ally: Someone who makes the commitment and effort to recognize their privilege and acts in solidarity with oppressed groups in the struggle for justice. Allies understand that it is in their own interest to end all forms of oppression, even those from which they may benefit in concrete ways. An ally is someone who uses their privilege to support the rights of the marginalized. (www.blueprintforall.org)

You know this already. Women are routinely discriminated against, harassed, assaulted, murdered. Even in the workplace, sexual discrimination is rife, put-downs, harassment, touching are all common. You know these are wrong. Now is the time to step up and say something about it.

If that doesn’t get you, self-interest should. A diverse workforce is better than a homogenous one. Especially in design, take 10 identikit men (what Grayson Perry calls “default male”) and you’ll get 10 similar answers to a design problem. Add some women, you get a different perspective. Add some people of different religion, background, ethnic group, class and so on, you get a much deeper and broader perspective on the problem and a much better solution.

The first step is to realize that as a man (or more, a white man) you have privilege that others don’t have. You might not feel this is the case, because this is so ingrained in life that you just accept it as normal. I’d urge you to watch this very powerful short (4 minute) film, it will change your mind: https://youtu.be/buYh81cvrYs

Let’s start with some basic principles; sexist people exist in the world. Some are explicit, thinking a woman’s place is in the kitchen. Some are more subtle – no problem with a woman at work but what if she has to take time off to look after her children (what, and men don’t have children)? And some are almost unsaid – we want a team player, someone like us we can all get on with. Unnoticed that the speaker is white, male, middle class, and will, without realizing what he is doing, hire another white, male, middle class person.

If you’ve been interviewed for a few jobs, and each job has 2-3 panelists interviewing you, some of these people will have been directly or indirectly sexist. You’ve benefited from this by getting the job instead of a woman. Her career is held back. If you have pitched for 100 projects in your career, a fair number of them will have been decided by a sexist person, and you have won that job instead of a woman. Her career has been held back by this. Ever wondered why there are so few people in senior roles in FTSE 100 companies? This is why. It only takes one hire/not hire decision to turn a meteoric career path to a lesser one, and after 20 years of this, the only ones left with a meteoric career path are men.

Male privilege exists. Pretending that it doesn’t is not helping. It doesn’t mean your life is not hard, it means that your genitals are not one of the things making it hard.

Don’t worry. We’re not blaming you. It wasn’t your decision to hire you after all, and you aren’t going to turn the job down. But having reached a position of relative power, you can help right the inequalities in the world. Reach down and help up others, support them. Help right the wrongs of this situation by using your power and privilege to do so.

What can I actually do?

Remaining silent (or worse, joining in) when others make sexist jokes or remarks gives the impression that you agree. Already marginalized and bullied, now the target feels like they have no support. This prevents them taking action.

Recently I was at a hotel opening where the interior designer, a talented woman who had been publicly praised in the opening speech by the hotel owner, had her bottom pinched during the drinks reception. She didn’t want to do anything about it, as “this company is just all like that, and they won’t take it seriously”. If she thought instead that the company was not like that, that most people were on her side, that HR would act appropriately over what is after all classified as a sexual assault, the situation would be different.

Do not sit there, silently. Stand up and be counted. No, I’m not putting up with this. Yes, it does come with an element of personal risk; if it didn’t it wouldn’t be brave of you. But don’t you want to think of yourself as a brave person, the kind of person who stands up for others? Be the best version of yourself, the kind that doesn’t sit there and say nothing.

Why is this your fight though? So someone’s been put down, assaulted, whatever. Can’t they deal with their own problems?

Well, not always, no. By definition, the people this happens to have less power and are often afraid to use what power they have. “Don’t want to make a fuss” or “nothing will happen” or “it’ll harm my career if I make a fuss”. Why should they be the ones whose career is harmed? Why not you? Take a stand. You know it’s right. This is your chance to do some good in the world, and stick it to The Man at the same time.

Don’t use your privilege to belittle others, use it to support them to change the attitudes that are entrenched.

Above all, get involved. Saying you are anti-sexist and then doing nothing about it doesn’t help. You’re just doing it to look good. This is called “performative allyship”. Nobody is fooled.

Don’t ask people what you can do to help. Work it out and do it.

Anyone who is in a management position knows that supervising and instructing people is a job in itself – assigning tasks, dividing labour. By asking “what can I do to help?” you are adding to the mental load of the person you are asking.

Someone has had a sexist comment made at them, or had their body touched. They are probably in shock, and don’t quite know what to do. Additionally, many people have an instinctive reaction of “pretend it didn’t happen and it’ll be OK,” so in this situation the question “how can I help” is worse than useless, adding to her mental load and achieving nothing. Express sympathy, support, then act. Find this person’s name, their managers name, call the police if appropriate.

Better, educate yourself on what to do. Ask for support from other bystanders. Which brings us to Bystander syndrome.

Bystander Syndrome is when people who witness an event are more likely to do nothing the more witnesses there are. Everyone thinks someone else will do it, or someone else is more qualified to do it. You’re in a meeting and someone makes an inappropriate remark about a woman present.

What are you going to do? Instinctive reaction is nothing. Your boss will do something, right? Or the architect, he’s more senior. He’s also probably thinking the same thing. Nothing happens. Nobody says anything, the woman feels unsupported and alone and unable to make a fuss for fear of being branded a troublemaker, a killjoy. But the opposite can happen. Years ago, I was on the tube when someone was the victim of racist insults. A guy just got on the carriage and started ranting at an elderly Asian couple, minding their own business, about why they didn’t “go home”. It was unpleasant to watch. I didn’t do anything. Then someone got up and said “I’m not going to tolerate your racist behavior. I’m going to make you stop, and you’re getting off at the next station. I’ll do it alone if I have to but I’m sure others agree with me”. And then someone else stood up and said the same thing, and before you know it, the whole carriage forced him off the tube. It was great and we all felt amazing about ourselves afterwards. Actually, just writing about it now brings back flood of emotions. This is what can happen.

But what can you specifically do in the lighting industry? Be aware that this happens. Be aware a woman in a less senior position isn’t necessarily less hard working, less talented. She might have just missed out on what men would call a “lucky break”. Support her, even to your own detriment. Push women forward to positions, let them speak. Don’t talk over them because you are senior or just more confident. Recognize that they might need a hand up, or a break. Give it to them, without waiting to be asked. Follow and promote successful women on social media, talk them up, even to your detriment.

Be the first person to stand up. Use your privilege to help others achieve. Remember, you are not promoting them above their ability, or giving them undeserved prizes. You are helping them achieve what, in a fairer world, they would have achieved anyway.

You have power as a man, and in the words of Spiderman, with great power comes great responsibility. Recognize you have power, use your power to restore equality to the system. www.elektralighting.co.uk www.womeninlighting.com

For more information on how you can pledge your support to the Women in Lighting initiatives, visit www.male-supporter.paperform.co 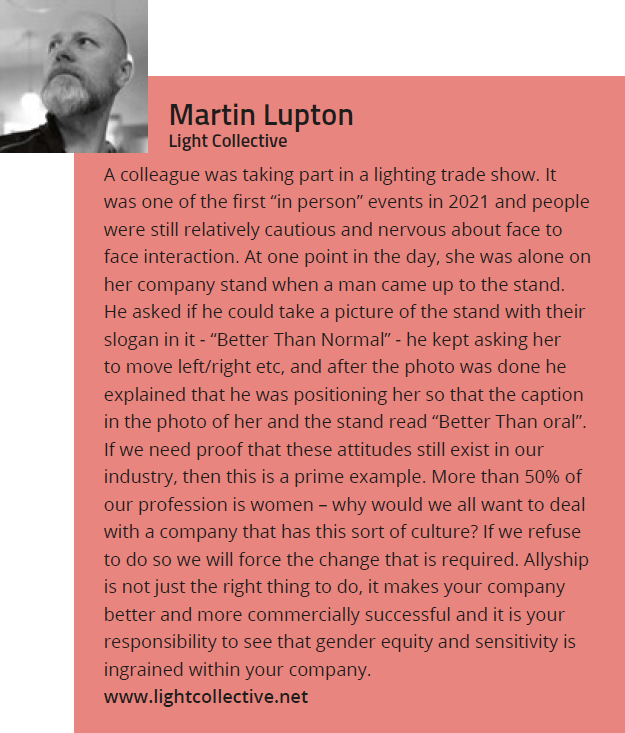 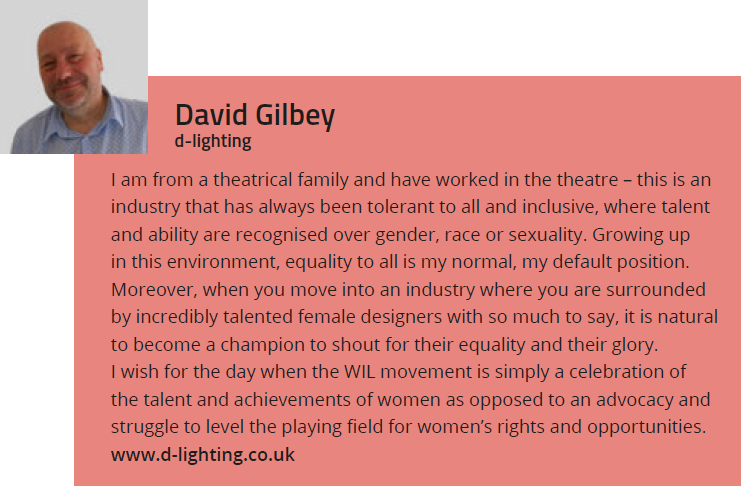 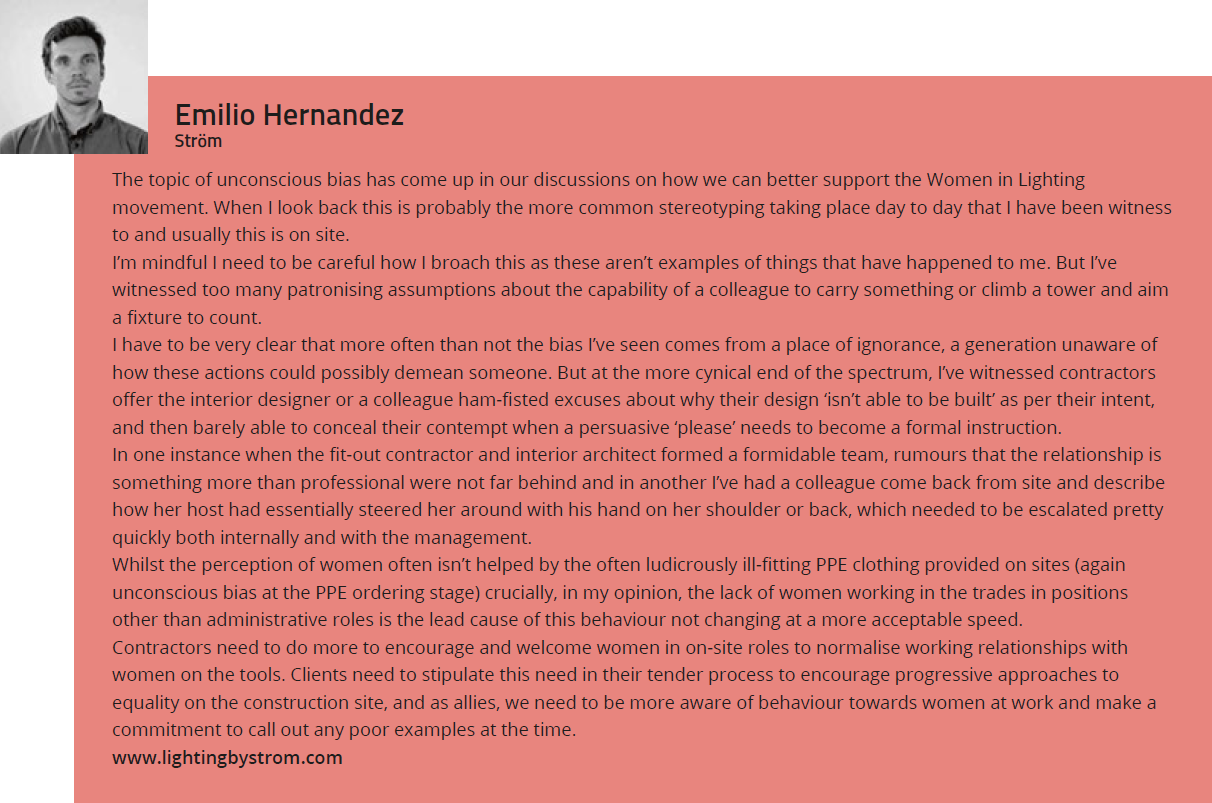 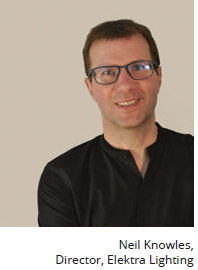 This article was originally published in arc magazine.

A world of thanks to Women in Lighting who, among many things, helped us gain reprint permission for this important article.