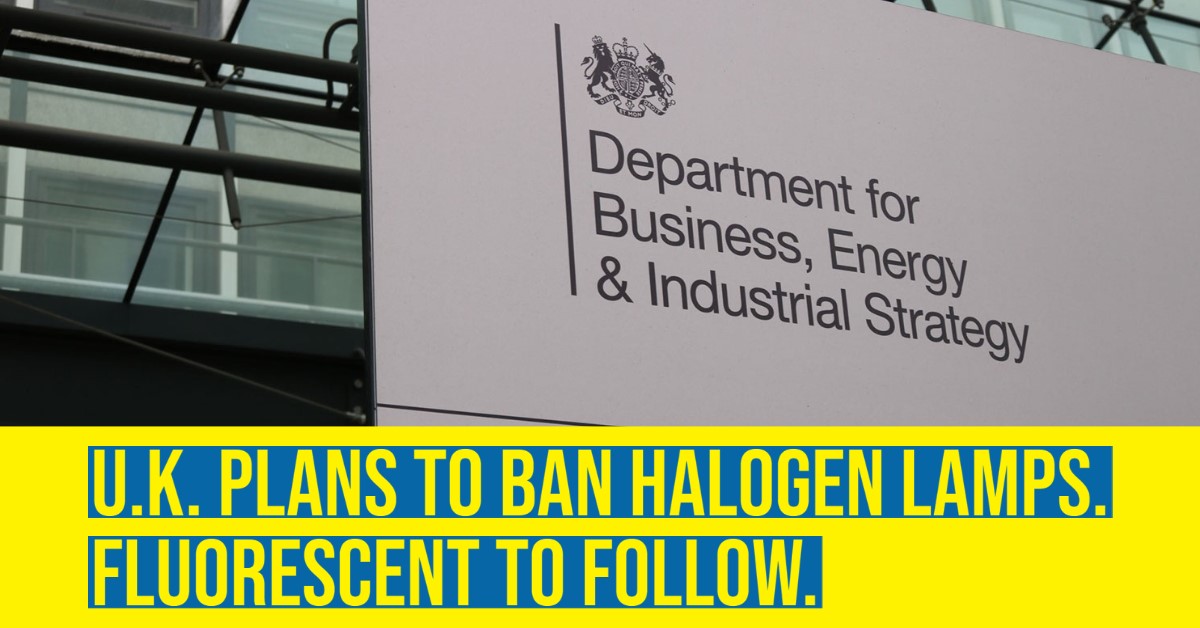 RELATED:  The U.K.'s Lighting Industry Association has issued a repsonse to this announcement citing ambiguity and errors.

The British government has announced plans to end the sale of halogen light bulbs from this September, as part of the UK’s wider efforts to tackle climate change.

Legislation being brought forward this month will also include the removal of fluorescent lights from shelves from September 2023.

Currently, around 2 thirds of bulbs sold in Britain are LED lights, making a considerable impact in improving the energy efficiency of the country’s buildings. They last 5 times longer than traditional halogen lightbulbs and produce the same amount of light – but use up to 80% less power.

The UK began phasing out the sale of higher-energy halogen lightbulbs in 2018. The new legislation would mean retailers will no longer be able to sell the majority of halogen bulbs for general household use in the UK from 1 September.

To help people make the switch, ministers are also announcing that all light bulbs will start to feature new energy efficiency advice via ‘rescaled’ energy labels on their boxes. The labels will simplify the way energy efficiency is displayed on a new scale from A-G, doing away with the A+, A++ or A+++ ratings. The new labels will raise the bar for each class, meaning very few bulbs will now be classified as A, helping consumers choose the most environmentally friendly bulbs.

This measure is expected to mean that LED light bulbs will account for 85% of all bulbs sold by 2030.

In addition, the government also plans to start phasing out the sale of high-energy fluorescent lightbulbs, with a view to bringing an end to their sale from September 2023.

Taken together, these new rules will mark a significant shift to more energy efficient and longer lasting LEDs and will stop 1.26 million tonnes of carbon being emitted every year - the equivalent of removing over half a million cars from the UK’s roads.

The move is part of a package of energy efficiency improvements to electrical appliances, which will save consumers an average of £75 a year on energy bills.

We’re phasing out old inefficient halogen bulbs for good, so we can move more quickly to longer lasting LED bulbs, meaning less waste and a brighter and cleaner future for the UK.

Flicking the off-switch on energy inefficient light bulbs is a simple way that households can save money at the same time as saving the planet.

Phasing out halogen bulbs in favour of LED alternatives that last longer, are just as bright and cheaper to run, is another way that we are helping tackle climate change.

We welcome the UK government’s next step in the transition towards more sustainable lighting products. Using energy-efficient LED equivalents for halogen and fluorescent lighting on an even broader scale will significantly help the UK on its journey to decarbonisation, as well as lowering the annual electricity bills for consumers.

Overall, the government’s package of energy efficiency improvements will also cut 8 million tonnes of carbon emissions in 2021 by reducing the amount of energy products consume over their life-time – the equivalent of removing all emissions from Birmingham and Leeds each year.