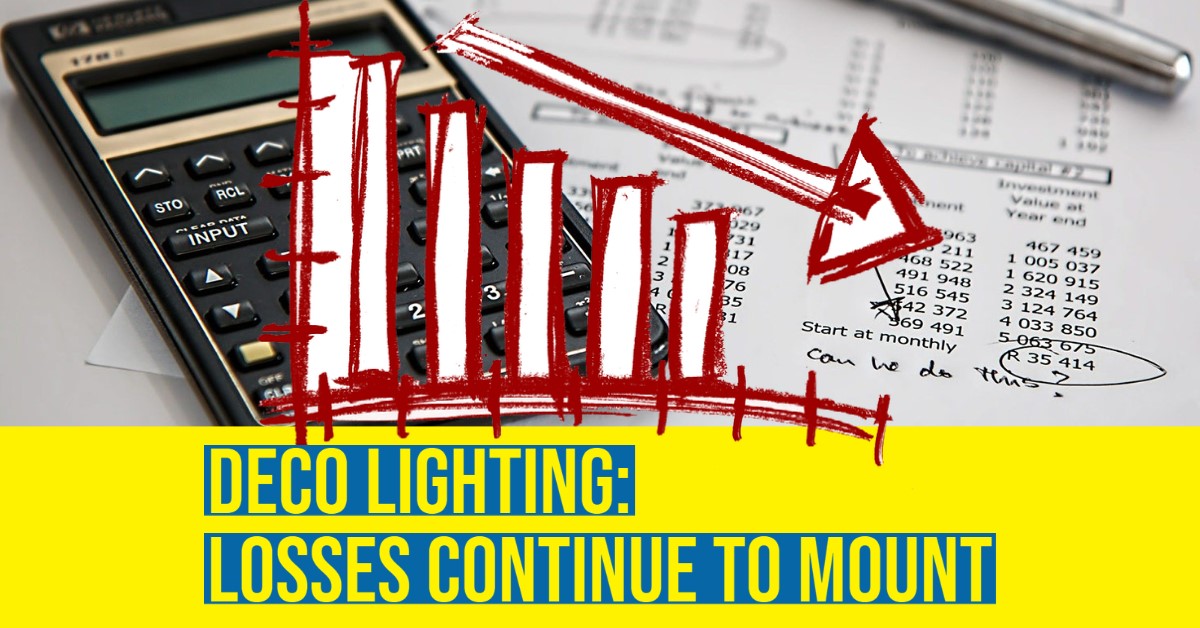 The bankrupt company's net losses in recent months exceed $1.2M as a company Co-Founder files a scathing objection with the bankruptcy court.

Since our April 6 article, “Deco Lighting Needs a Buyer” the company has filed two subsequent monthly operating reports in U.S. Bankruptcy Court. The monthly reports, along with others dating back to mid-2020, each show consistent six-figure monthly net losses while multiple recent financial reports contradict its marketing messages that promote Deco Lighting's commitment to pay lighting agents their earned commissions.

Company CEO Sam Sinai has funneled many self-promotional statements through EdisonReport in recent months including February statements that “Deco Lighting Proposes to Pay 100% Rep Agency Commissions” and "Deco continues to pay to their current agents."

The company’s operating reports show that a total of two lighting agents were issued commissions over a 2-month period beginning January 29. Thus, Sinai’s statement that was concurrently published by EdisonReport appears to be false. In April, the company seemed to turn the commission payment spigot back on – but Deco Lighting’s 26 commission payments totaled only $16,781 – representing just over 4% of average monthly sales.

Sinai continues to receive a monthly automobile allowance in the amount of $1,699.38.

In another recent development, former Sinai business partner and Deco Lighting Co-Founder, Ben Pouladian, has filed an objection with the bankruptcy court pointing out what he contends to be deficiencies in the Deco Lighting bankruptcy restructuring plan that the company proposed to creditors and to the court.

Pouladian, who is listed among the company's creditors, believes that the plan fails to make required adequate disclosures, that it is in bad faith, that it impairs the unsecured creditors and that it simply is not feasible. Below are some of the objections raised by Pouladian in the court filing:

Deco Lighting represents "that a 'newly formed company' will 'own' 100% of Deco, and this currently nonexistent and unnamed entity will make a 'new value equity contribution’” of $500,000.

"Who are the 'new value contributors and, as they are anonymous, how does a creditor know they are anything but a fiction? No evidence exists that the promised half million dollars from the as-yet-to-be-created ‘white knight’ entity/person will ever be forthcoming. Moreover, what will be the management role in Deco of this purported new 'investor' who is putting in more than 50% of the new equity value?"

While Deco Lighting did not share the name of the investor in the proposed bankruptcy plan, EdisonReport published multiple headline news stories that identified the anonymous investor as a "major lighting company" – and eventually revealed the company's identity to be a company called "Premium Quality Lighting, Inc."

Many lighting agents and lighting suppliers are part of the $9 million pool of Deco Lighting creditors. Pouladian argues that "the Plan is in bad faith as the unsecured creditors are impaired by the plan. Thus, unsecured creditors will recoup only 5% of their approximately $9 Million in claims."

How can Deco Lighting produce income when it is consistently losing $200K+ per month?

“It is clear the Plan is not in 'good faith.' Moreover, the Debtor had an average net loss per month of approximately $205,000 and they are contemplating average net income of $293,000. How is this possible considering they already had DIP financing since December of 2020?”

"The Plan also asserts that Deco will receive $293,000 in net monthly income from operation of Deco’s business during the term of the Plan. Other than this bald-faced assertion, there is absolutely no evidence or other information that substantiates it. In other words, there is nothing to demonstrate that even one cent of a monthly net income from Deco’s operation will ever materialize." 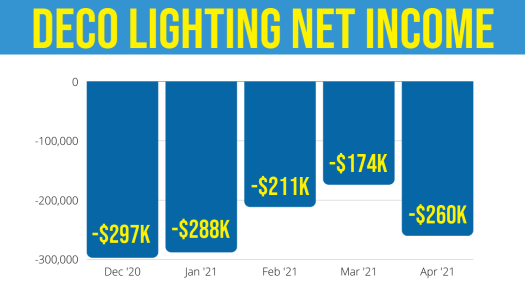 We did not contact Deco Lighting for comments as our most recent string of communication with CEO Sam Sinai in April involved him sending a disturbing mix of messages that included profanity, personal insults and a Joel Osteen video sermon.