If You're on the Fence about Attending LightFair... 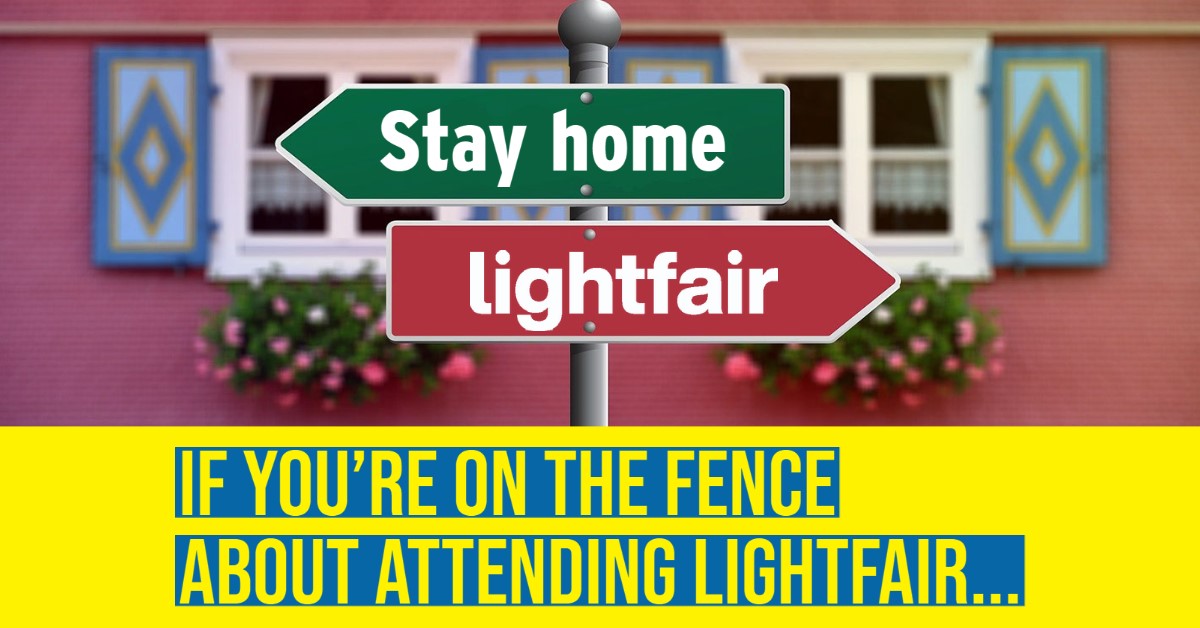 With LightFair less than 100 days away, it’s time to make decisions. Will you attend the late October trade show and conference in New York?

Each person’s decision to be a part of LightFair is affected by many variables. Attendees are often interested in many things including seeing the latest lighting products and technologies, attending seminars that are pertinent to one’s job, reuniting with current connections and making new connections.

Exhibitor decisions are often impacted by how many people are expected to attend, what is the anticipated quality of attendees relating to the exhibitor’s business, what are the costs associated with exhibiting and what are the downsides of sitting this one out.

Lightfair has recently published some videos and statements of some prominent lighting industry people, Lightfair Ambassadors, who offer many compelling reasons to be a part of Lightfair 2021. Those reasons should be enough to convince many lighting enthusiasts to attend, but here are some other ideas to consider while making your final decisions:

Exhibitor count may be down, but after a 2+ year hiatus, there will be plenty of new things to see

Fourteen weeks out, attendee registration is currently pacing 7% ahead of the same time period vs. 2019 LightFair.

We don’t have access to the registered attendee list, but we tend to believe that many of the top specifiers and distributors who normally attend East Coast LightFair will once again attend. There may be fewer attendees from places 1000+ miles away from Manhattan, but the New York location could actually have a major positive impact on the attendee count and quality. According to LightFair, 10,734 recent attendees of LightFair live within commuting, day-trip (car/train) distance of New York City.

A significantly higher percentage of East Coast professionals attend the odd-year shows while the majority of West Coast attendees attend the even-year show.  Those trends or percentages may not change much as a result of the pandemic.

International presence may be lower, but does that have a big impact on your show experience?

Asia represents a good portion of international exhibitors, but the popular Hong Kong International Lighting Fair takes place the same exact week as LightFair. Many North American attendees often don't value some of the super-economical offshore lighting product exhibitors, so this might be viewed as a good thing by many attendees.

In the past, attendees from 80+ countries have attended Lightfair. The number of international attendees will likely be lower this year. Most North American exhibitors derive most of their business from North American lighting people, so this may have little impact on the overall ROI for exhibitors.

The CEU tank might be full, but the in-person Conference still has major benefits

Many years ago, specifiers could justify expensive LightFair trips their firms with the rationale that they could knock out most/all of the CEU's they need to fulfill their professional licenses and accreditations. Today, with Zoom webinars abundantly available, specifiers need to justify their often-expensive business trip to NYC in other ways.

What are the impacts for LightFair 2022 in Las Vegas?

With the LightFair 2022 kicking off 7 3/4 months after LightFair 2021, will that further impact attendees from the Western U.S. & Canada?

The lighting industry continues to grow and welcome more and more people into the mix. Despite the industry’s increasing size, it is still an interwoven community of professionals who are often both friends and business colleagues. After 18 months of Zoom webinars and experiencing new products mainly on a computer monitor, we look forward to a slightly different, but still awesome LightFair in October. Hope to see you there!