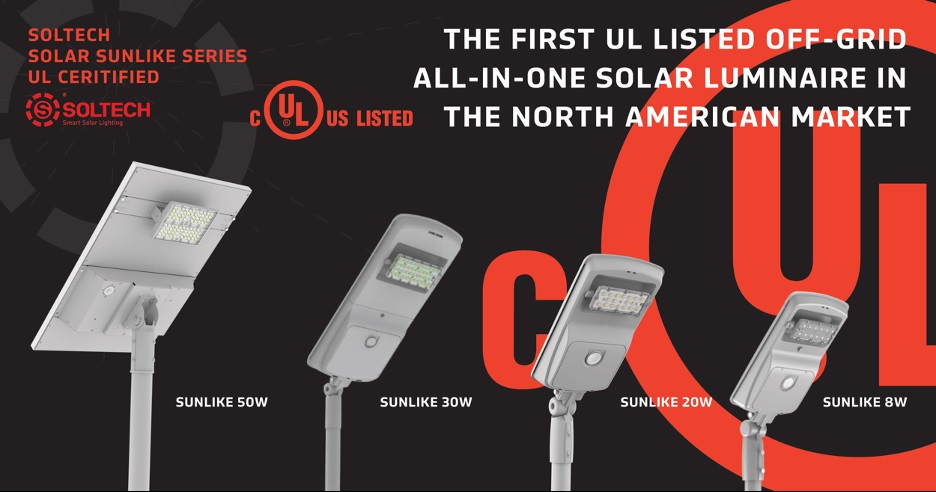 Off-grid solar light fixtures have been available in the Northern American lighting market for over 20 years, with manufacturers combining photovoltaic cells, batteries, control gear, and LED components into a luminaire.  Until today, manufacturers could only claim that all their components are UL listed. While this is an important start, it doesn’t verify the safety of the interaction between the UL listed components.  SOLTECH approached UL requesting safety listing for a complete off-grid solar luminaire.  As a leading safety standards and certification body, UL investigated the potential hazards and risks of the interaction between solar luminaire components, especially between the battery and photovoltaic controller, and how to ensure thermal runaway in the batteries is prevented.

Leo Liao, CEO at SOLTECH stated, “We are proud to have worked with UL for several years, inspiring their creation of the UL 8801 Outline of Investigation, for solar luminaires.”  Liao added, “We anticipate UL 8801 to eventually become a fully-approved safety standard for solar luminaires, and we’re thrilled that SOLTECH’s SUNLIKE Series is the first product line to get safety listed to UL 8801.  This is one more example of SOLTECH’s leadership in solar luminaires.”