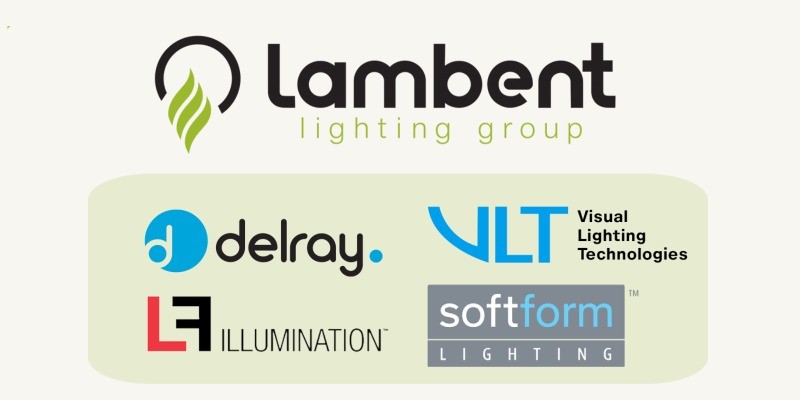 Lambent Lighting Group made a bit of a splash last month when it announced the acquisition of Visual Lighting Technologies (VLT). Shortly thereafter, the company quietly acquired SoftForm Lighting, a company best known for promoting the concept of Biophilic lighting. SoftForm Lighting is not currently cited on the websites of Lambent Lighting Group or its parent company Stone Arch Capital.

The new-look Lambent Lighting Group is now made up of four brands: LF Illumination, Delray Lighting, VLT and SoftForm. The company website hints that more brands may be added to the portfolio.

One of our popular inside.lighting InfoLetter features is the Local Markets update that reports new agent-manufacturer relationships. As we were preparing today’s report, we noticed dozens of agent changes that involved Lambent brands, so we reached out to the company to verify the activity. A spokesperson confirmed that the brands are indeed fully consolidating agents in most North American markets, yet some legacy agent-brand relationships will remain intact in numerous territories including San Francisco, Los Angeles, Chicago, Philadelphia, Dallas, Houston and others.

The 20 US & Canada lighting agents listed below recently added Visual Lighting Technologies (VLT) to their line cards. About half of the agents also happen to represent Acuity Brands.

NOTE:  An earlier version of this article stated that Diversified added VLT to their Philadelphia line card.  While that is a true statement, the recent Diversified line card update was apparently an error.  According to Lambent Lighting Group, the VLT line is remaining with Digital Filaments.