Proposed Code Could Slash Energy Use in New Buildings 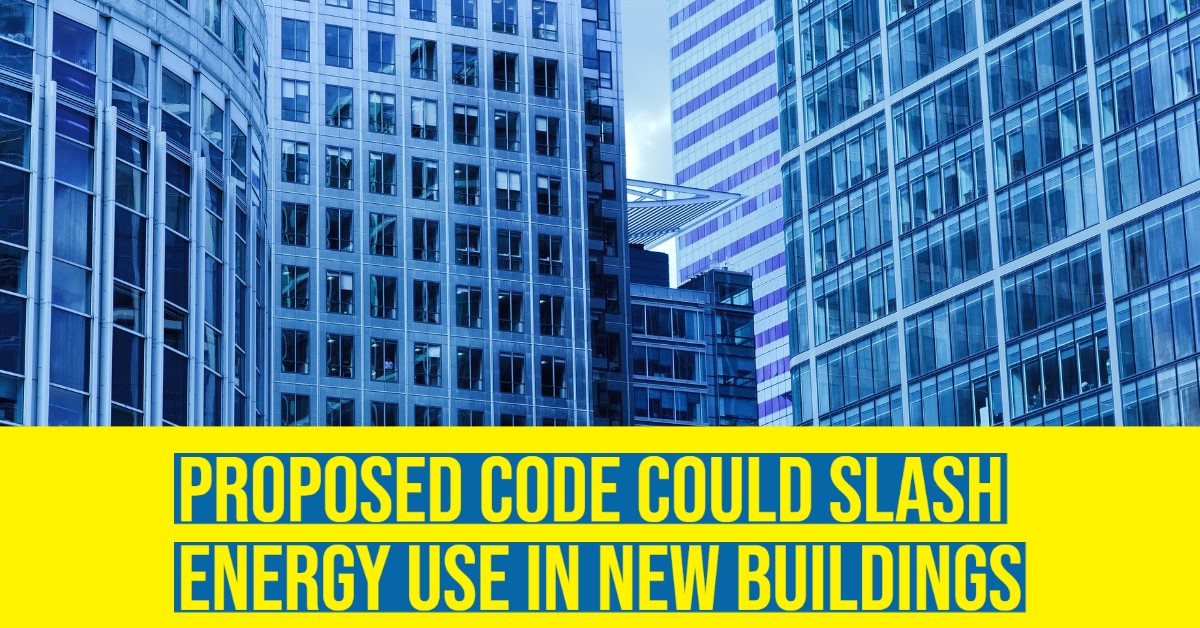 A draft model energy code for commercial buildings released Tuesday could reduce net energy use in new buildings by a quarter, which would be a major step toward zero-net-energy and carbon-neutral new buildings. The proposed 2024 International Energy Conservation Code (IECC) is now open for public comment through mid-October, giving stakeholders a brief window to advocate for a strong final version that can be adopted by states and cities around the country.

Residential and commercial buildings are responsible for approximately 40% of U.S. energy consumption. Energy codes are one of the strongest tools for reducing energy use and emissions from new buildings. Strong energy codes are also essential for an equitable energy-efficient economy because they set a minimum standard that all buildings must meet, ensuring that no household or business in a new building is left with needlessly high energy bills.

The proposed 2024 IECC-Commercial model code would require buildings to be significantly more efficient than those adhering to the previous version, from 2021. It would save an estimated 8% to 12% energy from improved energy efficiency, reducing energy costs and greenhouse gas emissions. ACEEE estimates the model code would result in an additional 10% to 12% net energy reduction from new on-site renewable energy requirements (with some exceptions that allow for off-site renewable energy procurement). New provisions that require flexible load management or even more renewable energy could produce an additional 7% energy cost savings. If approved, this would all add up to a major advance in energy codes.

What’s new in the draft code?

ACEEE and other energy efficiency advocates have worked hard to ensure a 2024 IECC that pushes for deep energy and emissions reductions while considering both upfront and energy costs, as well as the ability of jurisdictions to implement the new code. Among the most impactful proposed changes:

A number of other proposals were also approved by the IECC Commercial Consensus Committee responsible for IECC development. The public can comment and suggest modifications to the draft (including entirely new provisions), but any changes would also require a two-thirds majority vote of the committee.

How did we get here?

The IECC is developed on a three-year cycle, and a new process adopted for the current cycle limits the influence of sustainability- and civic-minded state and local officials who have delivered major efficiency gains in recent code cycles. Amid this challenge, ACEEE and other advocates for energy efficiency and emissions reductions have worked to ensure the International Code Council—which runs the IECC development process—delivers on its promise to maximize energy efficiency that is “safe, technologically feasible, and life cycle cost effective.” ACEEE has been a voting member of the IECC Commercial Consensus Committee since the start of the current process in the fall of 2021.

There were some upsides to the new process, as proponents of code change proposals were able to work with committee members and other interested parties to improve their proposals, and working groups were established to address complex or related proposals. But given the time commitment required and the limited influence of those not on the committee, it remains to be seen whether the new process is a sustainable model to reach zero-net-energy and carbon-neutral new construction.

What should we do now?

The work is not done, and the time to have input in this process is now. The International Code Council is accepting public comments on the draft code through October 21. With strong energy efficiency and decarbonization gains in the proposed code, we can expect pushback. Supportive comments in the public review period can help ensure committee members stand firmly on the side of reducing energy costs and fighting climate change.

ACEEE will continue to work to improve the 2024 IECC during the public review period, advocating that the model code move away from fossil fuel-burning space heating and water heating, ensure all building envelopes meet minimum levels of performance, and increase energy efficiency while avoiding trade-offs with renewables.

About the ACEEE
The American Council for an Energy-Efficient Economy (ACEEE), a nonprofit research organization, develops policies to reduce energy waste and combat climate change. Its independent analysis advances investments, programs, and behaviors that use energy more effectively and help build an equitable clean energy future.