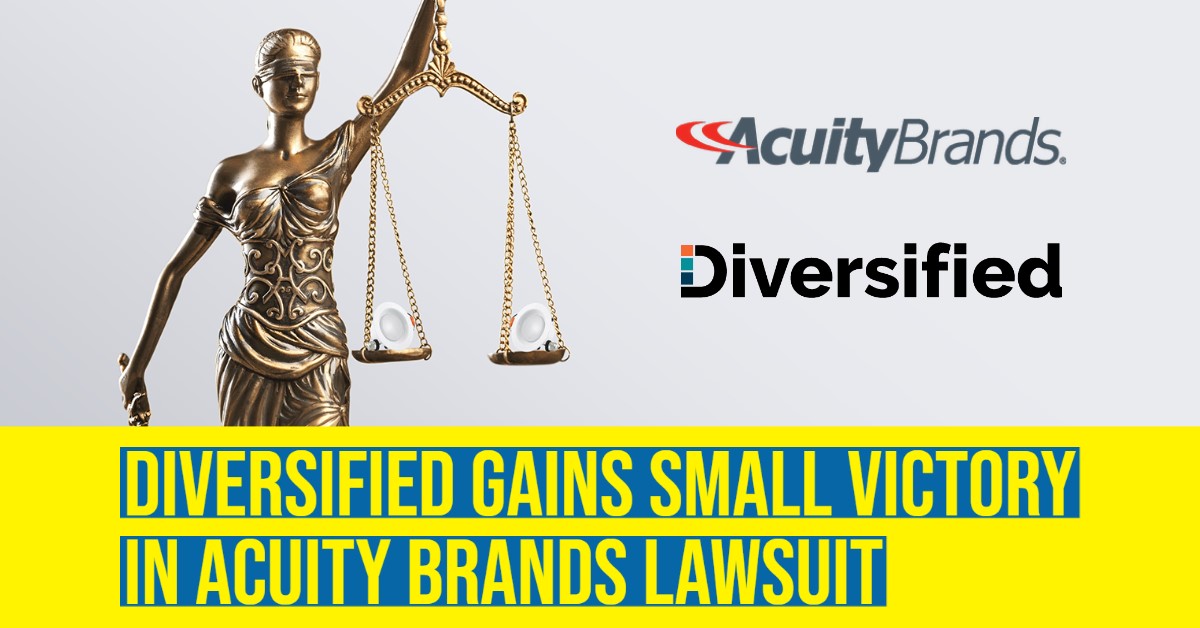 In November 2021, Acuity Brands filed a lawsuit against former employee, Tim Smitreski, and his new employer, Diversified. Diversified is best known for being a long-time, large lighting agent in the Philadelphia market, but in recent years has become what many consider to be the largest lighting agency in Northern New Jersey.

In 2020, Acuity Brands Regional Sales Manager, Tim Smitreski, signed a company stock award agreement that included some post-employment restrictive covenants (i.e. non-compete, confidentiality and non-solicitation provisions). The agreement paid out six-figure financial rewards, but also restricted Smitreski’s actions post-employment. Smitreski agreed not to use Acuity’s customer information if he left his job, not to speak to Acuity customers for two years and not to work for a competitor for one year.

Acuity alleges that Smitreski brazenly breached his written agreement by going to work for Diversified and soliciting lighting business from Acuity customers including large electrical distributor chains, Cooper Electric (Sonepar) and Turtle & Hughes. Acuity further alleges that Diversified has been intentionally interfering with the restrictive covenants in Smitreski’s agreement.

Two of Three Counts vs. Diversified are Dismissed

In what may be considered a small victory for Diversified, the court issued a ruling on Monday, August 1, dismissing two of the three counts against corporate defendant, Diversified. All five counts against Smitreski are still in play.

“When a competitor steals a company’s employee, that company may be able to sue. But bad behavior does not always lead to liability. The company must show that it was actually harmed by its competitor’s actions. And interfering with an employment contract does not make the competitor a party to it. Applying those rules here, I must dismiss two claims brought by a company against its competitor.”

As part of its allegation of Diversified’s interference, Acuity claimed that, on behalf of Diversified, Smitreski shared a golf cart at a recent event with a $5-6 million customer, Turtle & Hughes. Acuity also argued that Diversified principal, Bob Czarny, recruited Smitreski to join the agency.

The judge explained that for Acuity to show tortious interference by Diversified, Acuity needed to point to at least one lost business opportunity. It did not. So the judge deemed that Acuity failed to cite specific damages, thus dismissing Diversified’s exposure to Count V, Tortious Interference with Prospective Business Relations.

Smitreski hasn’t yet filed a Motion to Dismiss for Count V or any other count, but it may be possible for him to take a page out of Diversified’s Count V Playbook and get a similar result.

In Count VI, Acuity says the defendants, Diversified and Smitreski, should pay its attorney's fees for this lawsuit. Acuity said this is allowed by a Georgia statute that shifts fees "where the defendant has acted in bad faith."

When Smitreski signed the employment agreement, he also consented that the agreement would be governed by the laws of the State of Georgia. But as Diversified pointed out in its motion to dismiss, that agreement is between Acuity and Smitreski alone.

Diversified argued that it never consented to Georgia law, so the choice-of-law provision cannot apply to Diversified. Judge Bibas agreed, stating that “…it makes little sense to apply Georgia law to Diversified: though Acuity is headquartered in Georgia, Diversified has no contacts with that state and works out of New Jersey." Smitreski still has potential exposure to Acuity’s legal fees claim.

Below is an updated summary of Acuity’s allegations that are still in legal contention:

Court filings indicate that discovery between the parties may last through March 2023 – a likely indication, barring a mutually-agreed-upon settlement, that most of the activity in this legal conflict is still to come.