“And Another Thing!” – 7 Contract Terms Reps Want from Manufacturers 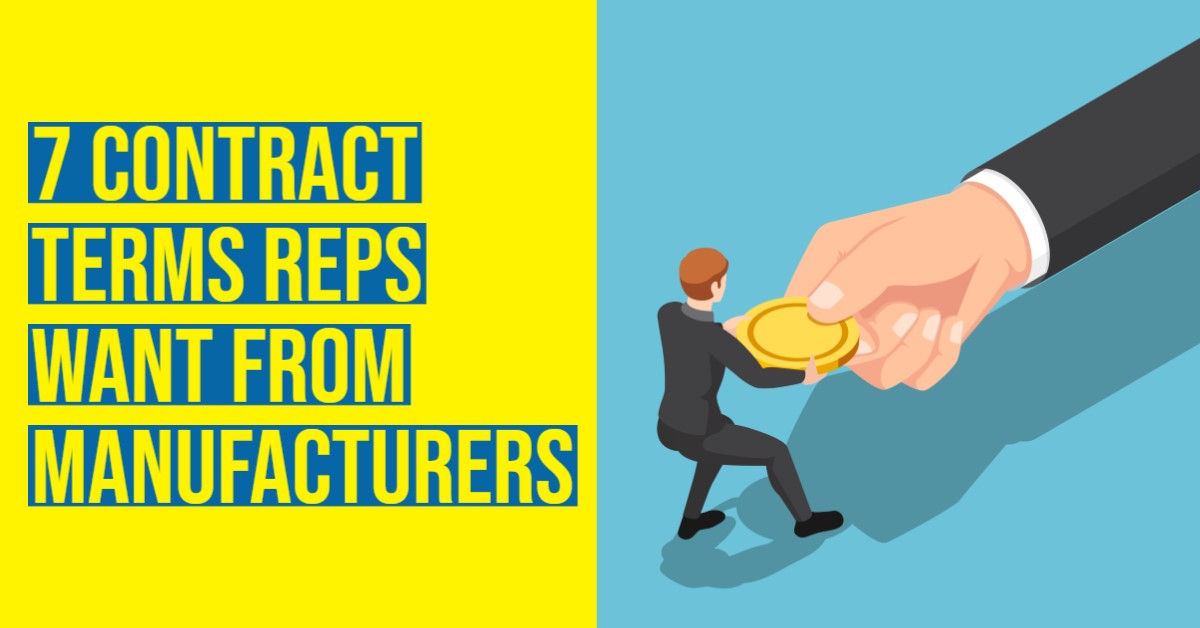 We asked 23 agent principals "What non-standard contract terms are important to you?"  Here’s what they told us.

As the two parties come together, there are issues that inevitably arise during the partnership or at the end of it that require the parties to reference the written contract. And, sometimes the divorce leaves one or both of the parties feeling that they didn’t get the return on effort that they invested in the representation.

As the party that usually writes the initial contract, manufacturers often have the upper hand in having the contract language protect their best interests while not exactly addressing everything that is important to the agent. So, we sought opinions from 23 lighting agent principals in the U.S. and Canada asking for best practices and lessons learned relating to sales representation agreements.

Manufacturers likely may have justifiable and sensible counterpoints to many of the ideas shared below. Furthermore, some of these ideas might be more applicable for brands that are geared more towards specification markets and their accompanying longer sales cycles rather than stock-and-flow distributor-focused brands. Finally, the #1 manufacturer in a category and the #1 rep in the market have much different negotiation leverage compared to an 18-month-old start up. Your results may vary:

This was the most popular topic in our survey. Agents want protection and compensation for order opportunities that they created but haven’t yet closed as orders. Some of the numbers and timeframes varied from rep wish list to rep wish list, but the themes were similar and emphatic:

EXAMPLE 1:
An auto dealership sued a lighting manufacturer in Oregon court for a lighting project that wasn’t working as expected. As part of its counterarguments, the manufacturer cited that the Oregon court was the wrong jurisdiction for the lawsuit. That prompted the plaintiff to then name Solus, the local lighting agent, as an additional defendant. The auto dealership’s tactic didn’t work as the court denied the motion to involve Solus, but the ordeal most certainly consumed many months of unnecessary time, energy and legal expense from the local agent.

EXAMPLE 2:
Heavy Duty Lighting filed a patent infringement lawsuit against lighting manufacturer Xicato and its local Austin-San Antonio agent, Design Build Lighting. We speculate that the agent was named in the suit solely because it was located in a favorable judicial district for intellectual property (IP) plaintiffs. Texas juries are reputed to be a Plaintiff-friendly audience for patent cases – awarding damages with greater frequency than in other U.S. Court jurisdictions.  The case was swiftly dismissed, but not before causing some legal headaches for the agent.

The lesson here is that agents are realizing that they should add contract language to protect themselves from significant legal costs if they get roped into a product quality lawsuit or an IP lawsuit.

A Southern U.S. agent suggested that indemnification should be a two-way street suggesting that “manufacturers should be protected if a rep makes a bad recommendation for an application that leads to legal proceedings.” 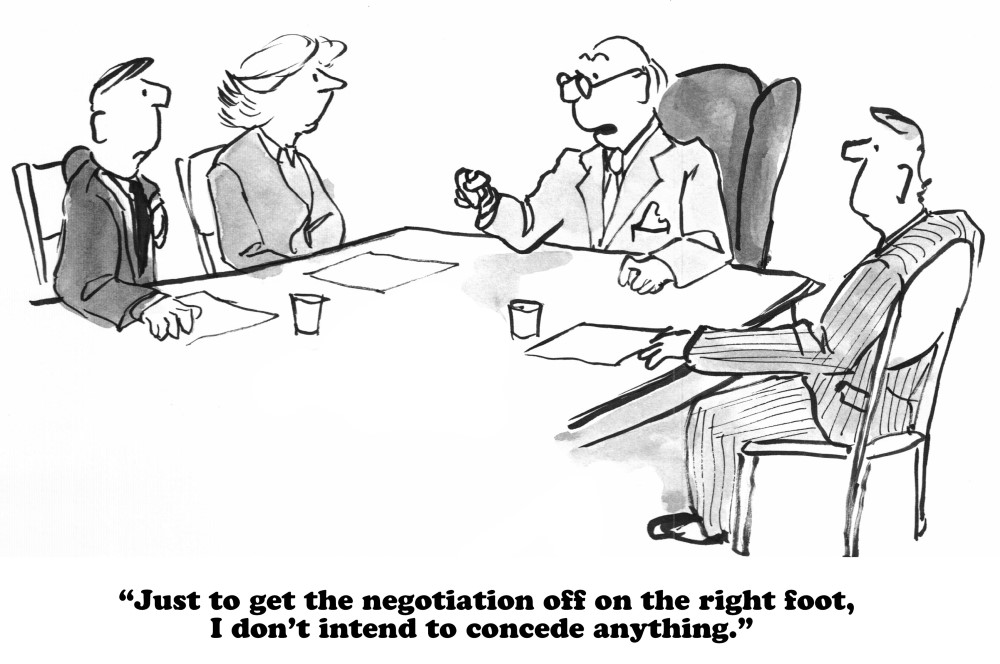 “Too many contracts are non-exclusive for territories which means either a manufacturer can sell around you, or worse, reps are allowed to sell anywhere. If it is a partnership, why wouldn’t the language be such that manufacturers can pursue business in a territory directly but with the rep being in the loop and paid? One rep should never be allowed to sell to a customer in another territory.”

Agents generally agree that there are certain channels like DOT, Utility, Showroom, National Accounts, Commercial AV and others that they might not touch. But many do have specialized teams focused on various channels and vertical markets. They just don’t want surprises and glaring loopholes that cut them out of something that is – or could logically be – the agent’s business.

Another agent suggested a “clause that prevents the manufacturer from unilaterally setting up access to new channels or direct buying” without the agent’s knowledge and agreement.

4. Give the New Agent Time to Succeed

One common theme from lighting agents, is that some manufacturers are sometimes too quick to end the relationship with a new agent partner. Some agents feel that they’ve been terminated before being given enough time for the rep’s product promotion efforts to turn into specifications, quotes and shipped orders.

Interestingly, many reps cited being fired mainly because the manufacturer’s new Regional Sales Manager was “tight buddies with the rep across town” thus killing a partnership through no fault of the existing agent.

One Eastern U.S. specification-focused agent stated “We require a new manufacturer contract to include a two-year minimum term to start. After that it would renew on a month-to-month basis.”

Some larger brands require an agent partner to ask for permission before taking on another lighting line that may compete with the big manufacturer. This ultimately gives veto power to the big manufacturer and may severely impact how the entrepreneurial lighting agent can run her business for maximum success in her local market.

“Line card management – or micromanagement – that limits competition” is not appreciated by many reps when they are asked to resign certain lines or abstain from representing certain new lines. One agent added “Manufacturers never ask permission to acquire a company that may damage the agent’s current portfolio. Feels one sided.” One agent shared an example of “being asked to drop Porsche because the conglomerate acquired Nissan.”

Agents would want to eliminate the line card management terms altogether – or add additional language that empowers their autonomy with certain reasonable exceptions.

When manufacturers launch new products, they invest large sums of money in R&D, testing, prototypes, certifications, etc. They also often invest tens of thousands of dollars on lighting agent samples. Anyone who has ever price-shopped a cubic foot of high-density foam knows that sample case costs can add up quickly. And when some agents don’t use the sample, or don’t promote that important new product family, that can frustrate manufacturers.

On the flip side, agents are entrepreneurs that don’t get paid until they sell something – often months after they sell something. The notion of covering the cost (or sharing the cost) of samples generates strong resistance from many agents. One agent suggested that a manufacturer should allow agents to opt-in to investing in samples, solely at the agent’s discretion.

In the end, this is an issue that arouses strong emotion and pushback from agents. Manufacturers who build sample costs into their cost of sales are viewed as better and friendlier business partners.

7. Protection When the Manufacturer is Acquired

A long time Focal Point agent explained that his heart sank for a moment when a Focal Point executive called him in 2020 to inform him that Focal Point was being sold. If the buyer was one or two specific lighting conglomerates, his agency certainly would have lost the line. The sale to Legrand was good news as the agent continued its Focal Point representation.

One agent suggested some sort of agency protection when a manufacturer sells the business. “Most agents in the country have played significant roles in building very successful independent lighting manufacturers’ businesses. Once those manufacturers sell, the manufacturer reaps all the financial benefit. The agent who helped build that business over time gets nothing; maybe even a 30-day termination notice.”

The agent suggested “In the event that the manufacturer sells the company there are two options available (1) immediately extend the agent’s existing contract by 36 months or (2) terminate the agent’s contract and compensate the agent the average of the last 3 years’ commissions as a lump sum separation bonus.”

A three year separation bonus may be a lot to ask for, but the suggested language is certainly thought-provoking. The notion of the initial 36-month extension prohibits the acquiring company to ride out the last five months of an expiring contract, before bringing the newly-acquired brand to their preferred agent.

Contract terms and negotiation strategies vary based on the parties and the circumstances. In perfect relationships the contracts are mutually-understood guiderails that don’t have to be continually referenced throughout the partnership.

And, when things don’t go smoothly, one agent summed it up by sharing “In our experience the contract is really bulls**t. The bad guys are going to be bad just the same.” Thankfully, there seem to be way more “good guys” than bad in the industry. But when you need to protect yourself, just reference the contract.