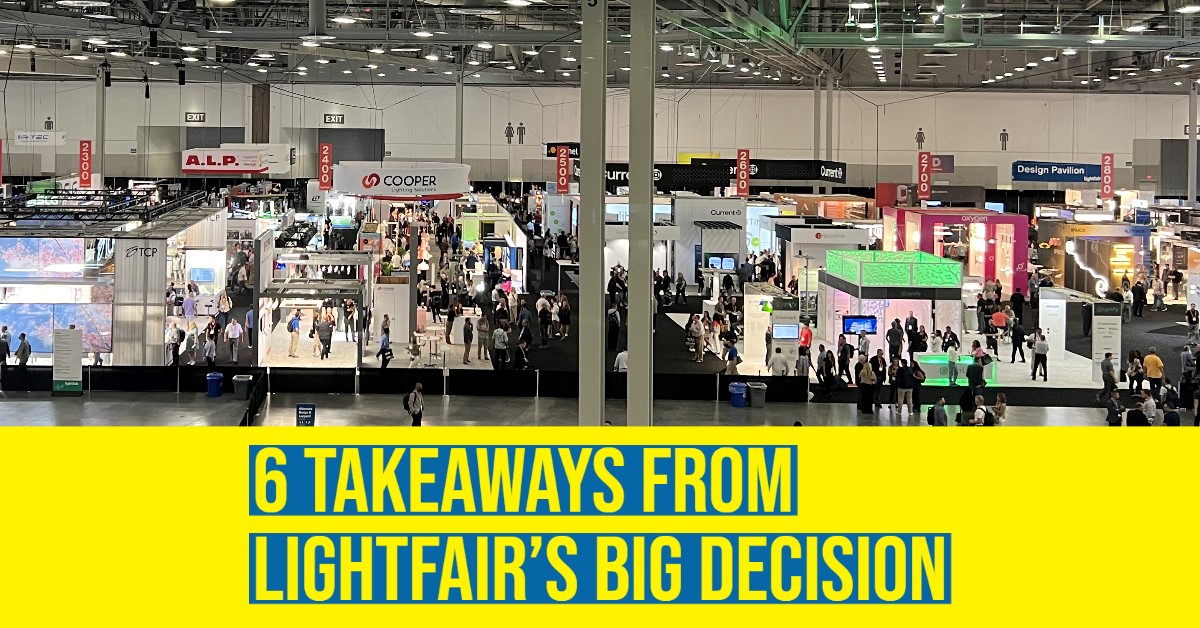 Since its inception in the 1980’s, LightFair has grown to become the largest lighting industry trade show in North America. In the 2010’s the event would announce record-breaking year after record-breaking year – reaching a crescendo leading up to the pandemic with 27,000+ attendees and approximately 600 exhibitors.

Then COVID happened. And all businesspeople understand the effects that the pandemic has had on live, in-person meetings and events. It may seem like eons ago, but it was just one year ago this week when a much smaller, vaccine-mandated, mask-required LightFair 2021 took place at the Javits Convention Center in New York City. The show had many positive attributes, but it was described as “small” and “eerie” by some attendees.

Over the last couple of years, lighting industry people have engaged in countless discussions on how to “fix LightFair.” Two common suggestions from lighting pundits were to break the event into regional shows or change the frequency from yearly to every two years.

Alas, the decision was announced today to officially make LightFair a biennial event, starting with LightFair 2023, which remains on schedule to make its return to the Javits Center on May 21, 2023.

We spoke with LightFair show Director, Dan Darby, who explained that the changes will truly help a wide variety of LightFair stakeholders; exhibitors, attendees, the IES and the IALD to name a few. Darby confirmed that the current plan is to continue with LightFair 2023, 2025, 2027 and 2029 at the Javits Center in New York.

Here are some possible second-order effects of LightFair’s big decision:

With LightFair being the large-scale event for the North American lighting industry, the ever-other-year rhythm may create a FOMO that draws long lists of exhibitors back into the fold while also bringing more attendees to the event. Industry people who rely on LightFair to create sales leads or find new business partners, will treat the event more like a must attend event, because skipping just one LightFair, means you’re on the sidelines for four years.

Lighting enthusiasts all over the world can get an annual trade show fix by experiencing Frankfurt, Germany's Light + Building in even-numbered years and LightFair in odd-numbered years.

Gone are the days when manufacturers in various industries use trade shows as their primary way to reveal their latest innovations to customers. But creating a two year hiatus between LightFair events will allow for companies to launch twice as many products and develop innovative solutions that may cause LightFair to become more of a can’t miss event.

3. Financial benefits for attendees and exhibitors

Exhibitor expenses that are often in the six-figures – and for larger booths, seven figures – will now be spread over two years of marketing budgets, not one. When show attendance increases, Marketing VPs can better justify the huge expense and use LightFair as a way to flaunt the brand while also showing the world what lighting innovations they’ve unveiled over the last two years.

When specifiers, distributors and agents attend LightFair, the trek is also often accompanied by expensive hotels, air travel and other large event-related expenses. Lighting agents often pay for highfalutin specifier and distributor customers to attend the event. Spreading these costs over two years, not one, will be more advantageous for the attendee and exhibitor stakeholders.

LightFair is owned by three entities: International Market Centers (IMC), the Illuminating Engineering Society (IES) and the International Association of Lighting Designers (IALD.) Before the pandemic, the Lightfair revenue share for each party was over $3 million each – but the 2020 absence of events and their accompanying revenues have caused financial challenges for both the IES and IALD.

The net result, especially in the short run, will be a far lower combined revenue expectation for the 2020’s, compared to the 2010’s which saw big year after big year and continuous growth.

With two LightFair events since the pandemic seeming like they were much less than half the size of previous LightFair events, the every-other-year format may be a way to accelerate a more rapid return to 20,000+ attendee LightFair events. While the number of events will be cut in half, this could prove to be a faster path to restoring LightFair to its previous high-profit glory years.

5. Contracts can be broken

While show director Dan Darby reiterated that the current plan is to continue with LightFair 2023, 2025, 2027 and 2029 at the Javits Center in New York, the recent biennial decision demonstrates a break from the plan to hold LightFair in even numbered years in Las Vegas through 2028.

We imagine that there is a letter of intent and/or a firm contract in place for LightFair to hold events in New York through 2029. But as the live event landscape continues to be fluid, it may be possible that LightFair chooses to shift locations to the West Coast or other parts of the country. Decisions to break contracts often come down to being able to swallow the termination penalties, or to negotiate a palatable exit from a previously made contractual agreement.

6. Will a critical mass of 20,000+ attendees trigger a return to annual LightFair events?

With so many stakeholders involved in LightFair decisions, it’s hard to believe that there is a diabolical plan to build LightFair attendance up and up and up – and then announce a return to annual LightFair frequency. We suppose that this will be an option that may be considered down the road, but given LightFair’s demonstrated willingness to listen and implement drastic changes, we would expect this to be a future consideration, but not an ironclad, hidden-agenda plan.