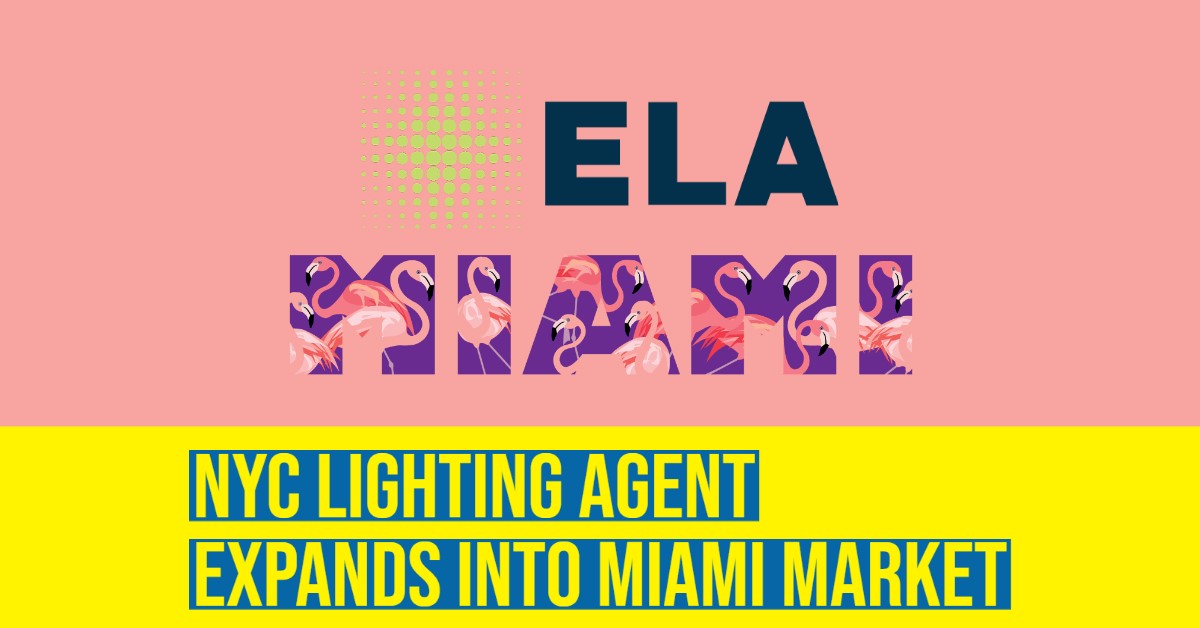 ELA’s recent expansion occurred 1200 miles south off Interstate 95 in Delray Beach, Florida, by way of merging with an already established lighting agent, Slater Lighting. The new agency is being marketed as ELA Powered by Slater Lighting in the South Florida market.  For decades, ELA covered both sides of the Hudson River, but has exited the Northern New Jersey market in recent years.

Longtime ELA principal, Tom Sica, informed us that the agencies have formed a 50-50 partnership and ELA was able to leverage its seemingly successful representation of Current HLI Brands (formerly known as Hubbell Lighting) into Current HLI representation in Southern Florida. Previously, the Current HLI brands were represented by SEFL. Sica also described many synergies that exist between the New York and Miami markets, especially with certain commercial developers.

Slater Lighting was founded in 2011 by Brian Slater. Slater initially focused on residential lighting but in recent years has expanded his focus on commercial lighting. Brian Slater, attended the University of Delaware at the same time as another ELA principal, John Weintraub. Weintraub is the son of longtime ELA principal, Roy Weintraub, and became an ELA principal in 2019.

This is not the first agency merger that ELA has orchestrated. Approximately ten years ago, ELA merged with Ted Pearlman’s Encore Sales Agency. Pearlman pulled in some coveted lines in exit/emergency lighting and dynamic RGB categories. Slater seems to be bringing a different complementary mix of lighter-commercial and residential products from numerous lines including Nora Lighting and Sonneman.

At the time of the merger, Slater Lighting had 9 employees. That has since grown to twelve people and is expected to increase even more in the coming weeks and months.

Brian Slater summed up the new partnership by stating “It has always been the heart of our South Florida team to serve our customers at the highest possible level and I think pairing that great service with now our most complete line card offering will really be improved experience for our customers."