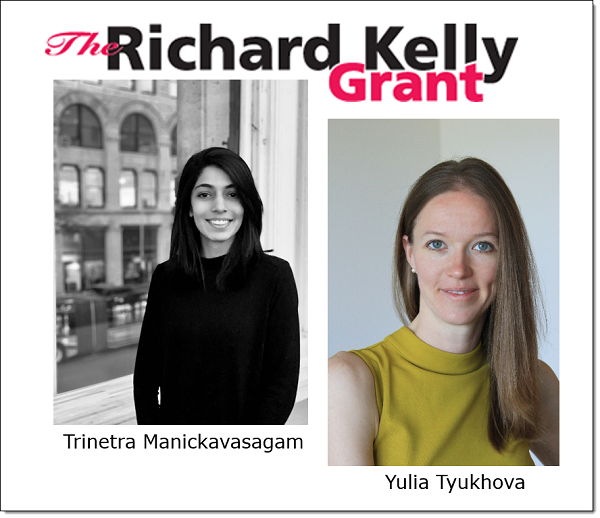 The Board of Directors of the Richard Kelly Grant selected Trinetra Manickavasagam, MFA and Yulia Tyukhova PhD, LC, as recipients of this year’s Richard Kelly Grant. The Grant recognizes and encourages creative thought and activity in the use of light.

These two lighting professionals have been recognized for preserving and incorporating Richard Kelly’s ideals, enthusiasm, and reverence for light in their own work. Since its inception in 1980, over 50 lighting designers, researchers, artists, and innovators. Cash awards will be granted to the recipients.

Trinetra Manickavasagam recently received her MFA in Lighting Design from Parson School of Design. She received a Grant for her work that examines the perception of source color changes in LEDs while dimming. Manickavasagam applied an evidence-based design process to determine if commercially available luminaires change color temperature when operated at different intensities. She intends to continue her research in order to evaluate whether her measured results can be correlated with viewer perceptions.

Yulia Tyukhova PhD, LC, received a Grant for her research in the fields of discomfort glare and lighting quality. Dr. Tyukhova is an independent researcher who has been a leader in the area of Discomfort Glare in the Outdoor Nighttime Environment (DGONE). Her work has included measuring and defining discomfort glare from bright light sources in high contrast environments. She was able to use this knowledge to develop a patented luminaire that minimizes glare potential. Dr.Tyukhova has also been an active spokesperson and educator on the topic of DGONE and has delivered an IES Education Webinar on the subject.

About the Richard Kelly Grant
The Richard Kelly Grant was established by the New York Section of the Illuminating Engineering Society in 1980. Originally conceived as a scholarship program and later opened to young persons working in lighting in North America, the Grant is administered by the New York Section under the auspices of the IES. Anyone 35 years or under, studying or working in the art and/or science of illumination, in the United States, Canada or Mexico can apply. Applicants must demonstrate accomplishment as well as the potential to contribute to the art and science of illumination. Proposed, completed, and on-going work involving light may be submitted and should clearly illustrate the way in which the conceptual or applied use of light in new and innovative ways is used to solve or better understand a problem.

For information on how to apply for a Grant, or to donate, please visit https://www.ies.org/membership/grants-scholarships/the-richard-kelly-grant/

About Richard Kelly
Richard Kelly (1910–1977) devoted his life to extraordinary contributions to the lighting design profession. He was one of the pioneers of architectural lighting consulting. His reverence for, and his understanding of, the behavior of light was promulgated as the design values known as focal glow, sparkling brilliance, and ambient luminescence. He was a designer of over 300 major projects, worked with over 80 prominent architects, and he always performed with original and inventive authority.  He sought to first understand the problem and then followed with a creative solution. His synthesis of technology with artistic purpose transformed the ordinary into beauty. A few of his most recognized accomplishments are the Seagram Building, Mies van der Rohe and Philip Johnson, architects; Philip Johnson’s Glass House and The New York State Theater at Lincoln Center, Philip Johnson, architect; the Kimbell Museum of Fine Arts and the Yale Center of British Art and Studies, Louis Kahn, architect.