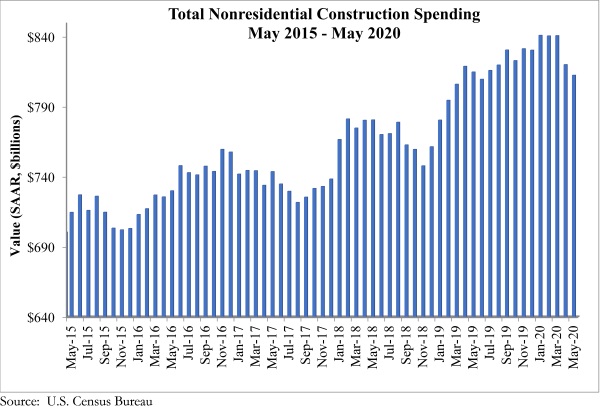 “Certain aspects of today’s data release are precisely what was anticipated, while other elements are rather surprising,” said ABC Chief Economist Anirban Basu. “For instance, the precipitous 5.3% decline in health care-related construction spending is hardly shocking, as many elective surgeries, dental appointments and wellness checkups were postponed, resulting in billions of dollars of losses among medical systems. In addition, many medical systems have experienced large-scale layoffs in an effort to preserve cash balances.

“Other segments negatively affected include lodging, manufacturing and power, which was expected,” said Basu. “A general lack of travel and occupancy has slowed hotel construction. A shrunken global economy and disrupted worldwide supply chains have pummeled industrial construction. And the energy sector has taken a hit from commodity prices that remain significantly lower than pre-crisis levels, truncating demand for new construction.

“What is surprising is the overall stability of construction spending,” said Basu. “In May, nonresidential construction spending declined by less than 1%, which represents a level of stability not enjoyed by much of the balance of the economy. Spending in a number of categories, mostly public, was higher for the month, including highway/street, public safety, transportation and water supply. Moreover, certain construction segments may experience rapid recovery going forward, including health care, manufacturing and power. For now, construction spending data and ABC’s Construction Backlog Indicator, which stood at 7.9 months in May, show that the industry has managed to remain a bulwark of relative stability in the face of ongoing pandemic-induced economic dislocations.” 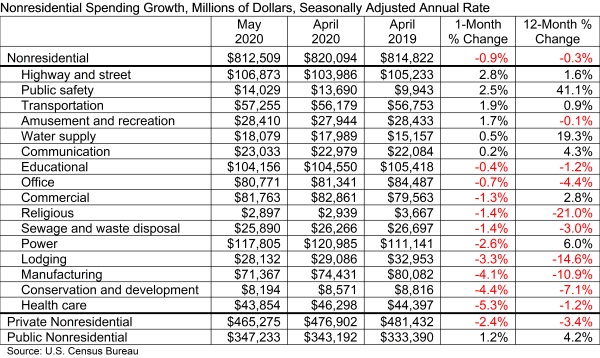