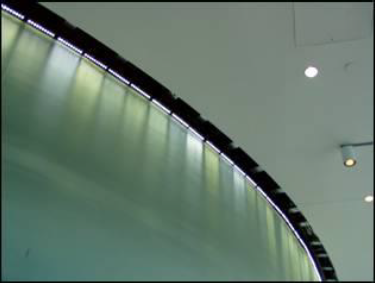 The U.S. Department of Energy publishes report that explores the impact of LED color shift over time.

If you are visiting this website, you are likely a lighting professional. You are familiar with terms like LM80, CCT, LPW and other exciting lighting industry acronyms. You are involved in lighting in some way, that ultimately causes an end user -- the ultimate customer, who may not be an astute lighting expert -- to end up with a lighting solution in which you may have been involved in some way.

That end user is familiar with basic things about lighting. If 1 of 8 fluorescent troffers doesn't turn on, it's time to replace some lamps -- or perhaps a ballast. If a long row of 5+ year-old metal halide high bay fixtures light up in a rainbow of colors, it's probably time to relamp.

It's well-known that LED light sources don't fail like other light sources. When the tungsten filament breaks in an incandescent lamp, it's time to replace. But when LED fixtures, slowly lose lumen output over many years, the change may be imperceptible to the end user who learns to live with the slowly changing "normal" light levels in the space.

But how will the LED owner of today, and 5-10 years from today, know that the fixtures they are buying will have a sustainable color over time? How can the LED lighting decision maker be sure that the 4000K fixtures they install today don't slowly shift to an undesirable pastel shade of blue, yellow, green or red over time?

How will the LED owners of today, and 5-10 years from today, know that the fixtures they are buying will have a sustainable color over time? How can the LED lighting decision maker be sure that the 4000K fixtures they install today don't slowly shift to an undesirable pastel shade of blue, yellow, green or red over time?

Here is a summary of the recently published report. SOURCE: U.S. Department of Energy

Another area of investigation for LED packages is the new chip scale package (CSP) LED platform. CSP LEDs have gained prominence recently due to their lower cost from minimizing materials and manufacturing steps, as well as their small footprint allowing for tighter packing in a luminaire. The number of CSP product offerings continues to grow, as well as the number of manufacturers offering this LED product type. CSP products are finally starting to reach the 6,000 hour test point for LM-80 reports and analysis can begin on this new LED package platform.

In addition to the chromaticity shift behavior from the LED packages, optical materials in the lamps and luminaires tend to yellow or discolor due to oxidation effects, leading to chromaticity shifts in the yellow direction.

While LED chromaticity shift does occur and can impact the performance of LED lighting products, the new understanding summarized in this paper has allowed the industry to manage the negative impact of such a shift. While LED based lighting can exhibit significantly improved color stability compared to conventional lighting products, their long lifetime requires an understanding of how color might shift over this long life. Further research is needed to develop improved predictive models that will enable manufacturers and consumers to understand the tradeoffs and make informed decisions regarding LED lighting performance requirements and product capabilities. 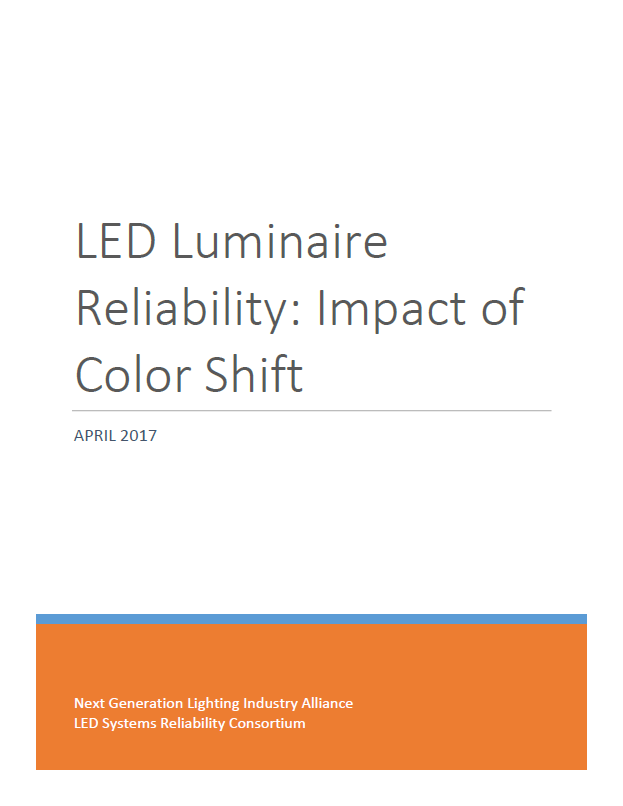 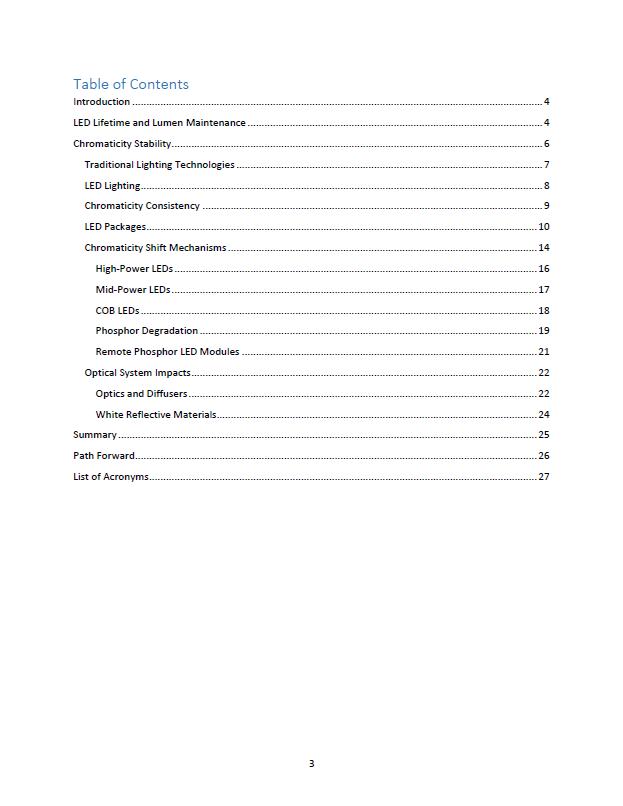 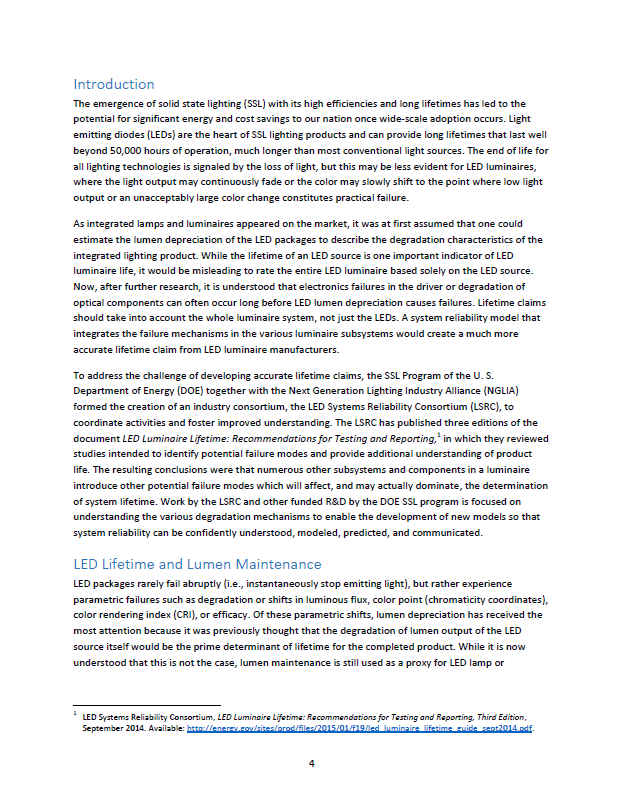 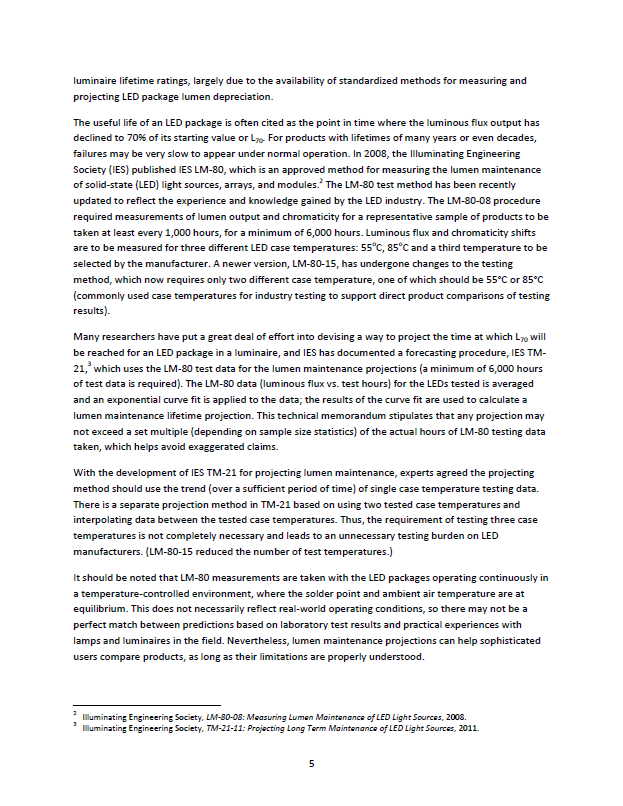 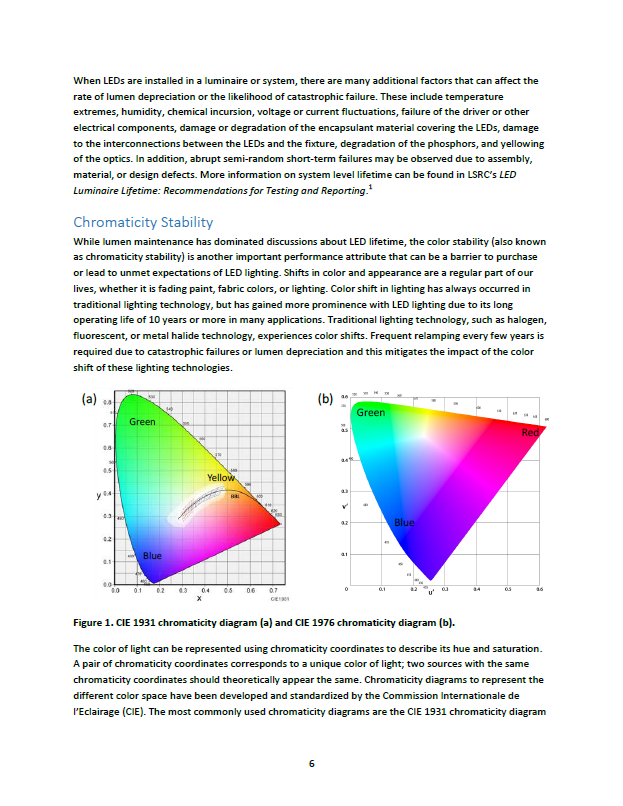 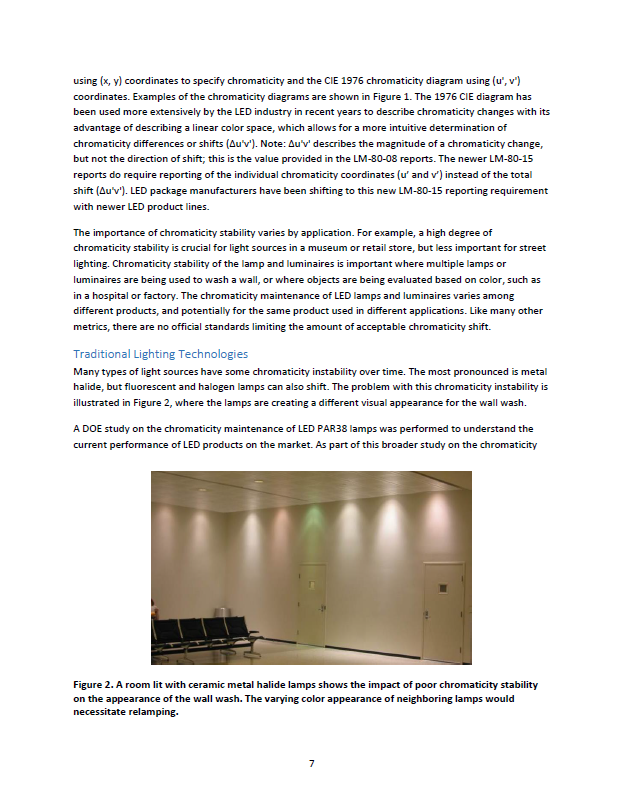 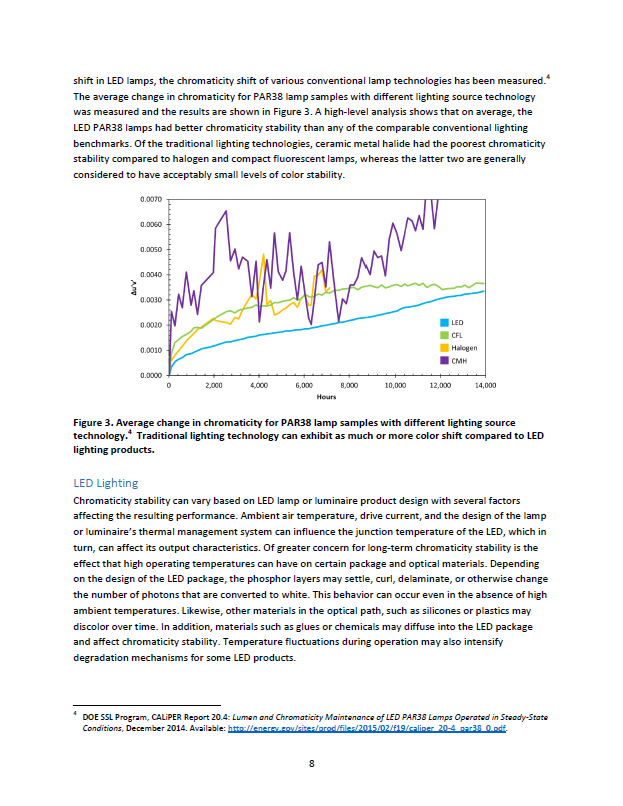 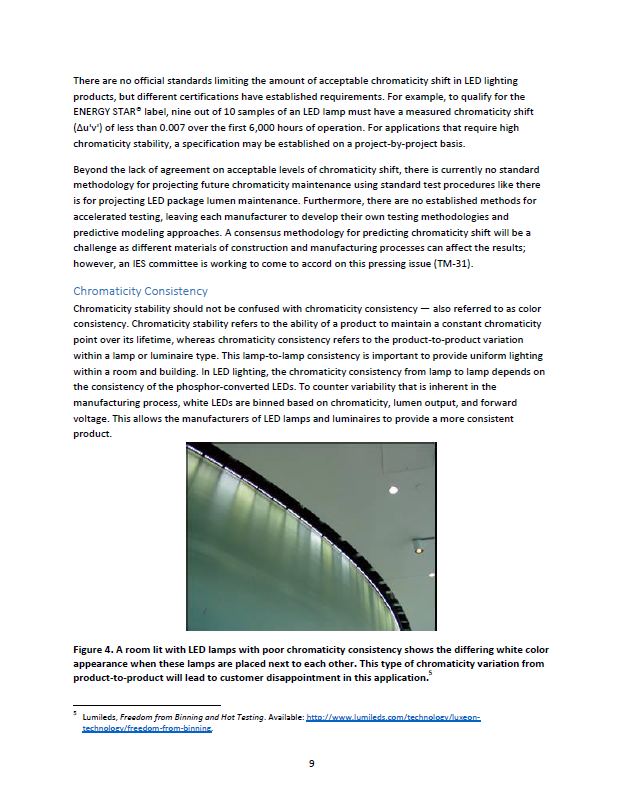 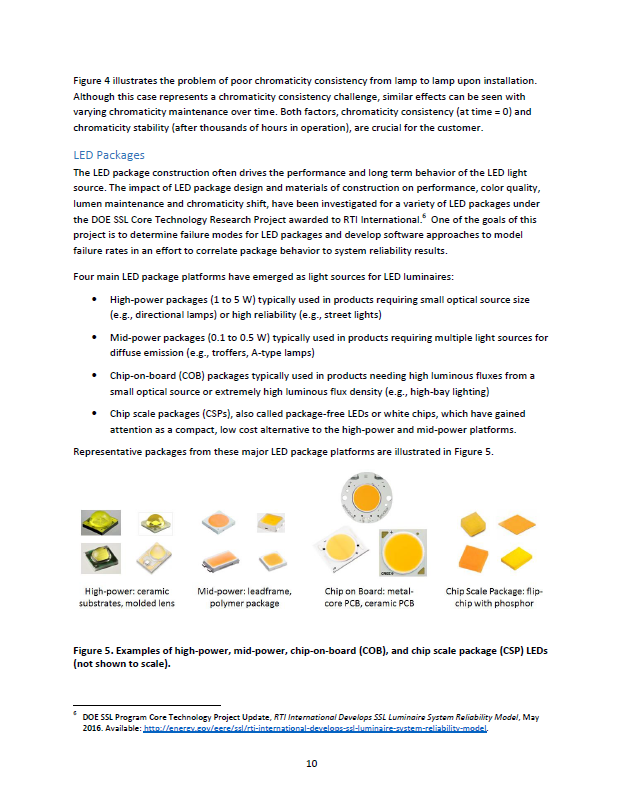 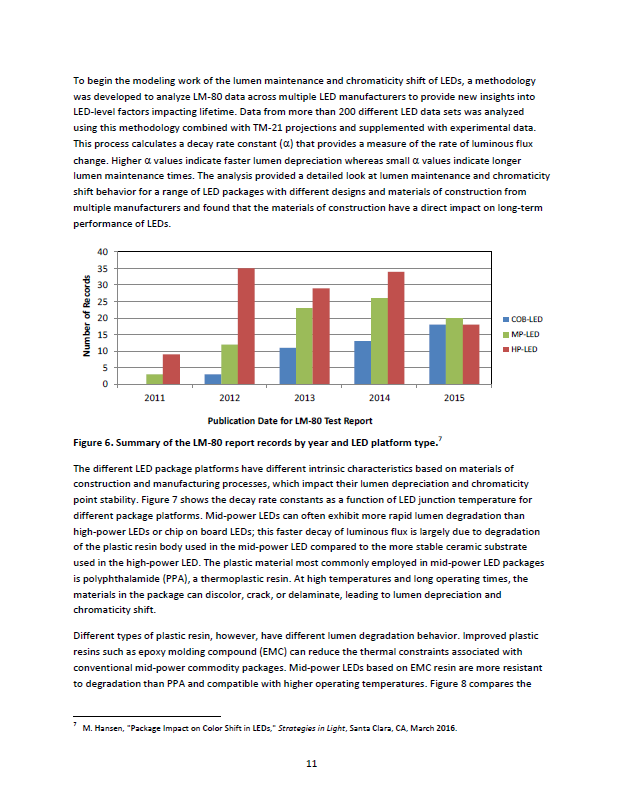 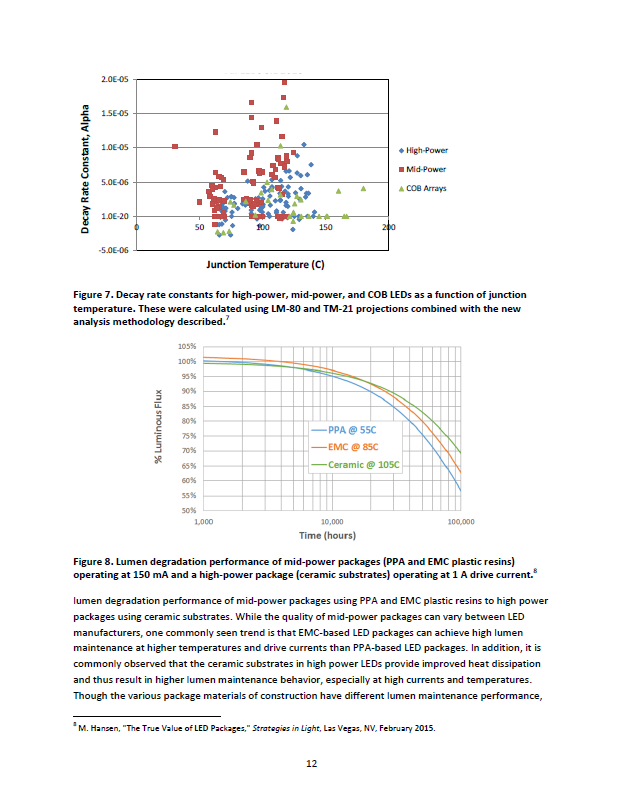 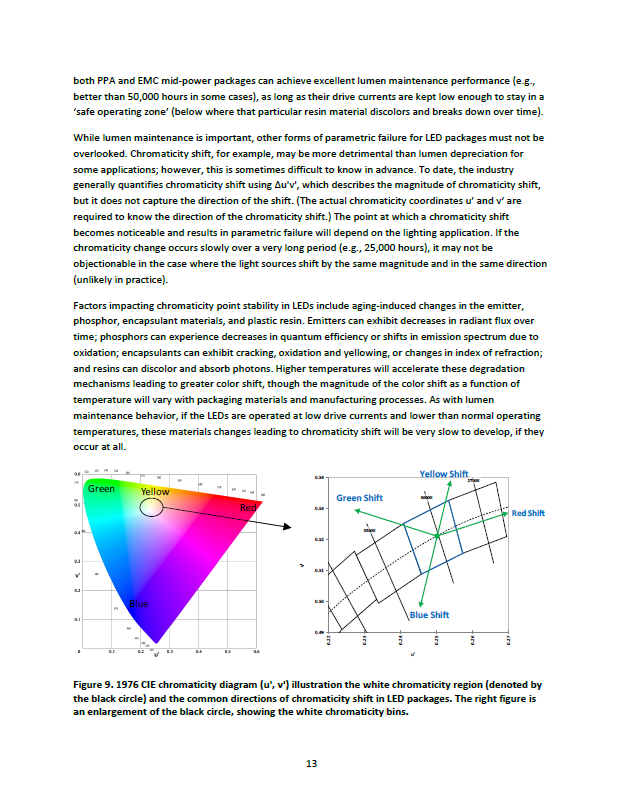 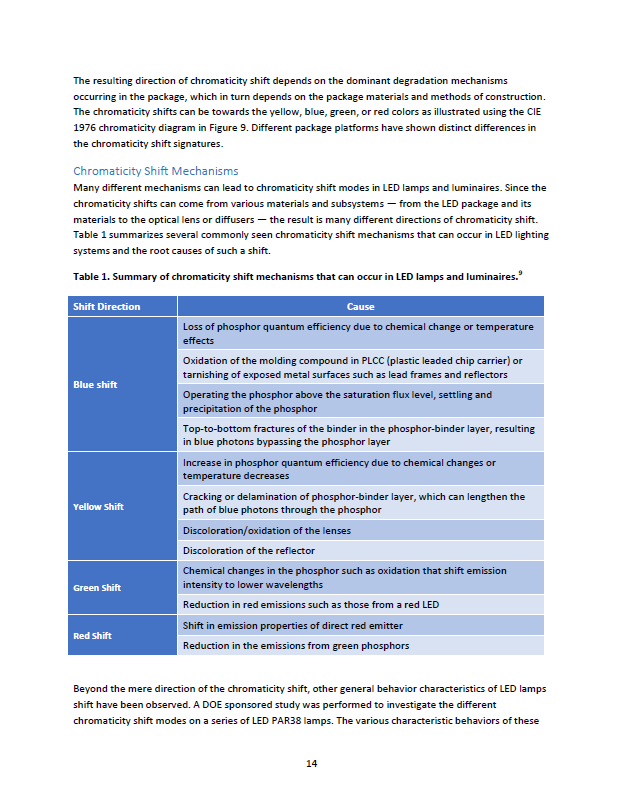 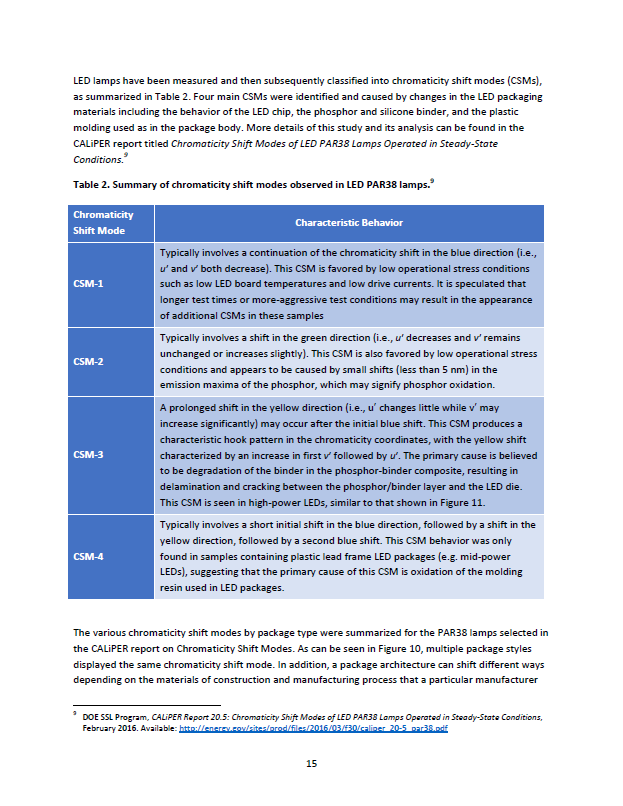 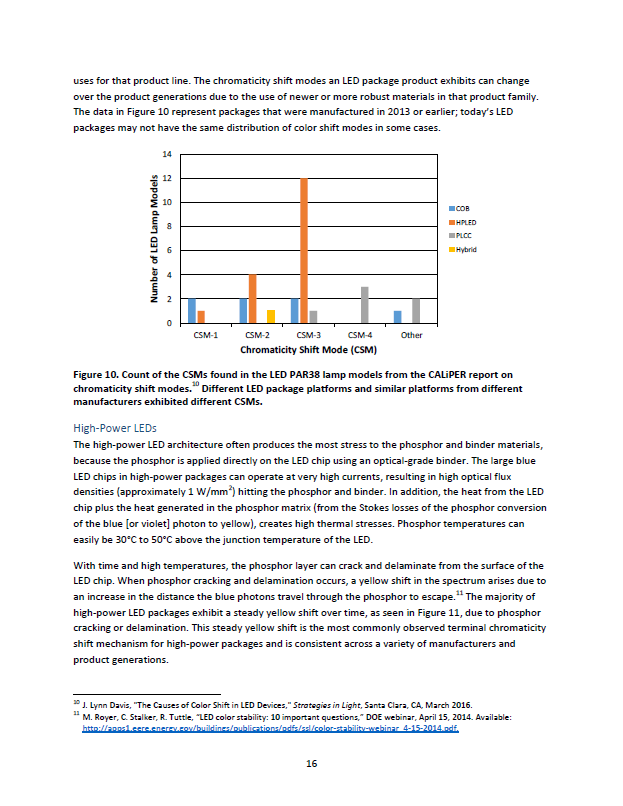 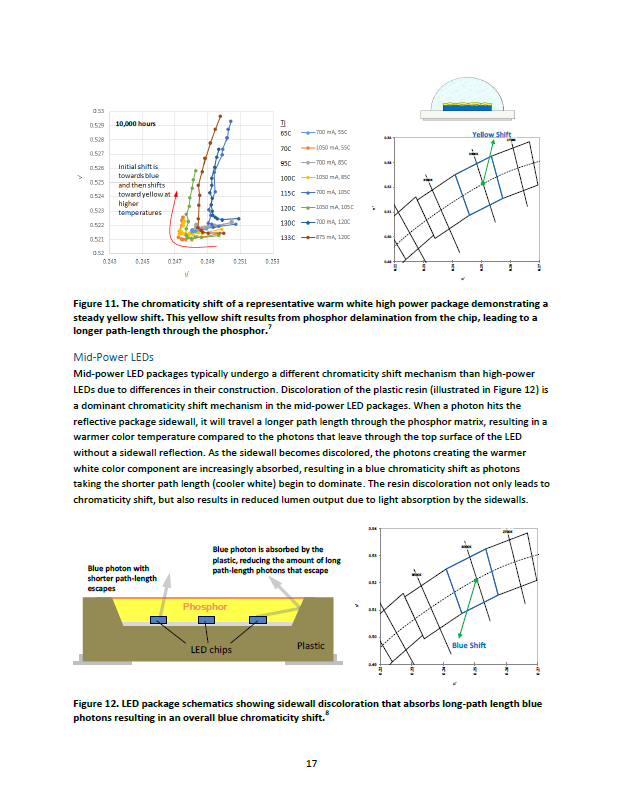 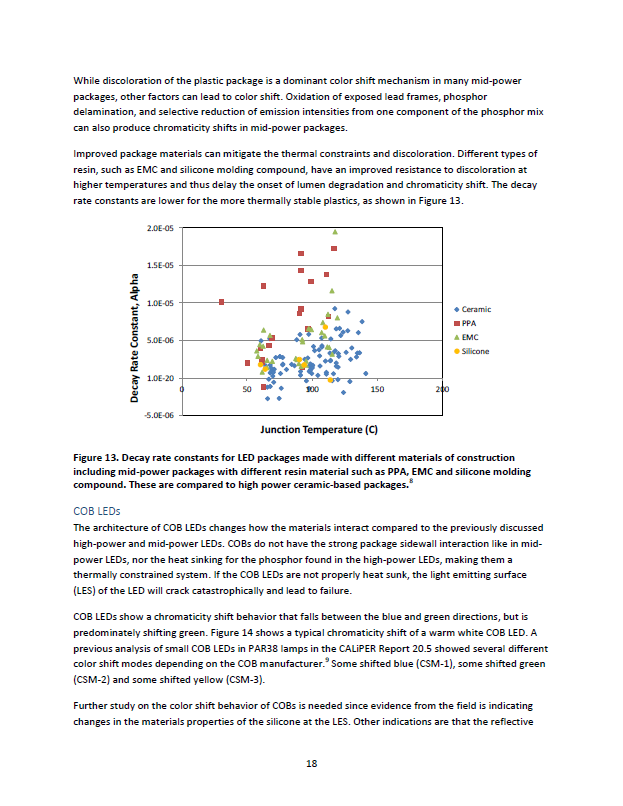 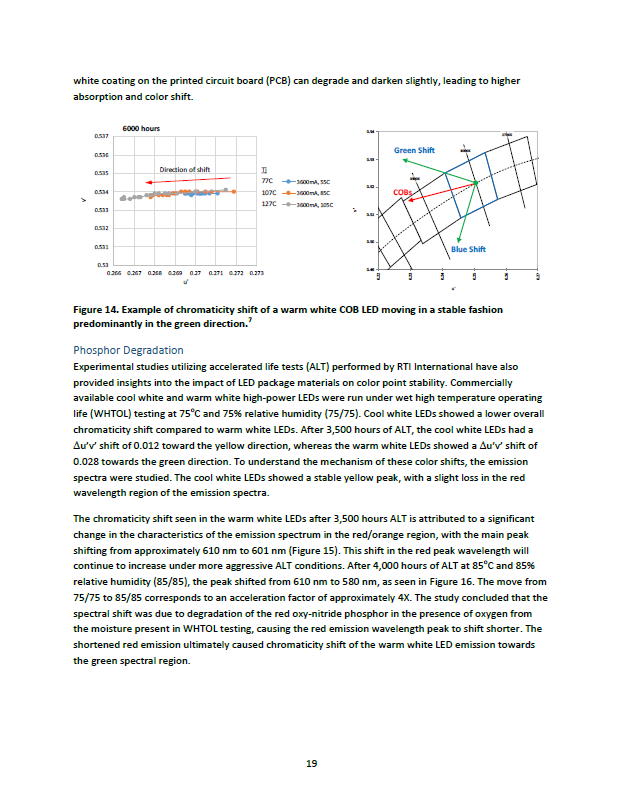 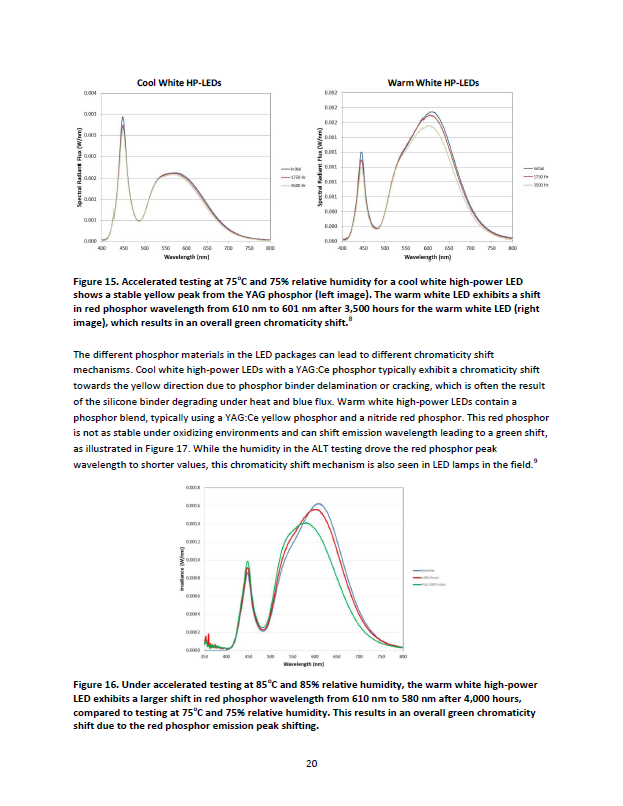 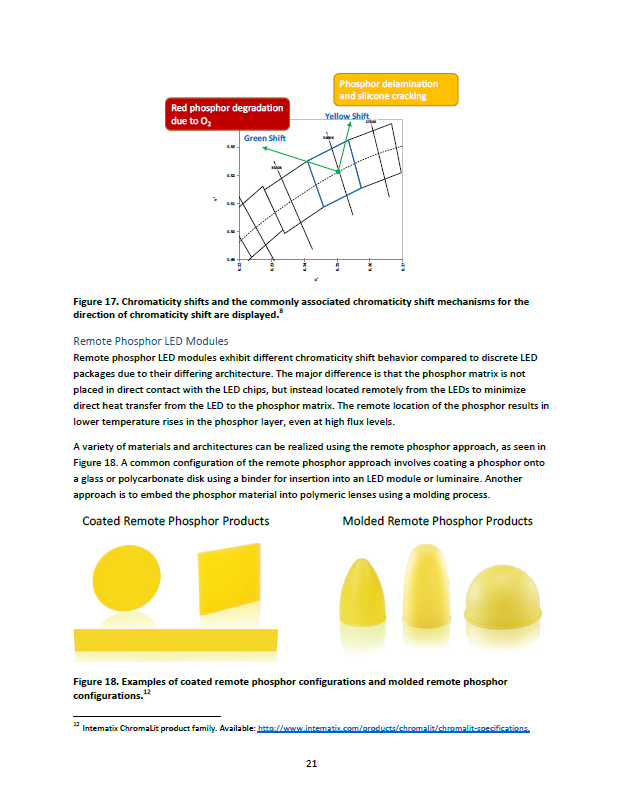 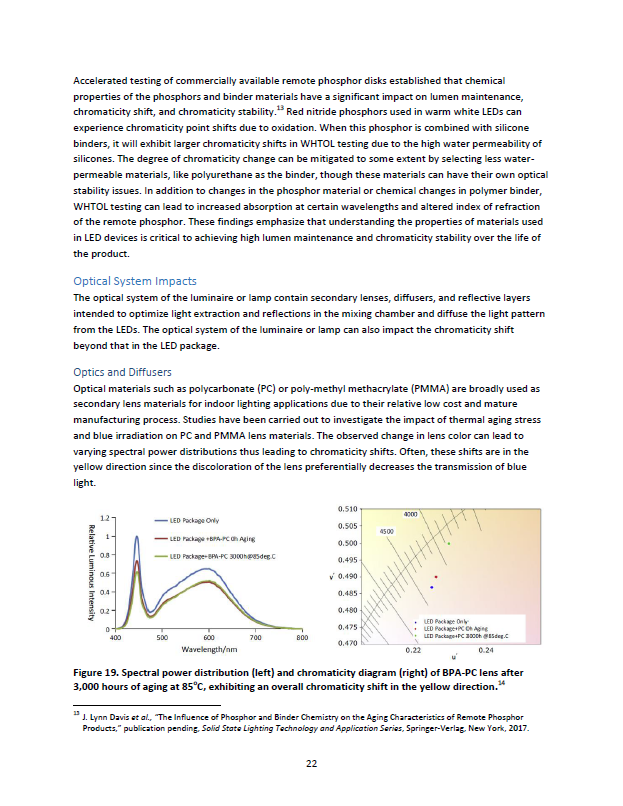 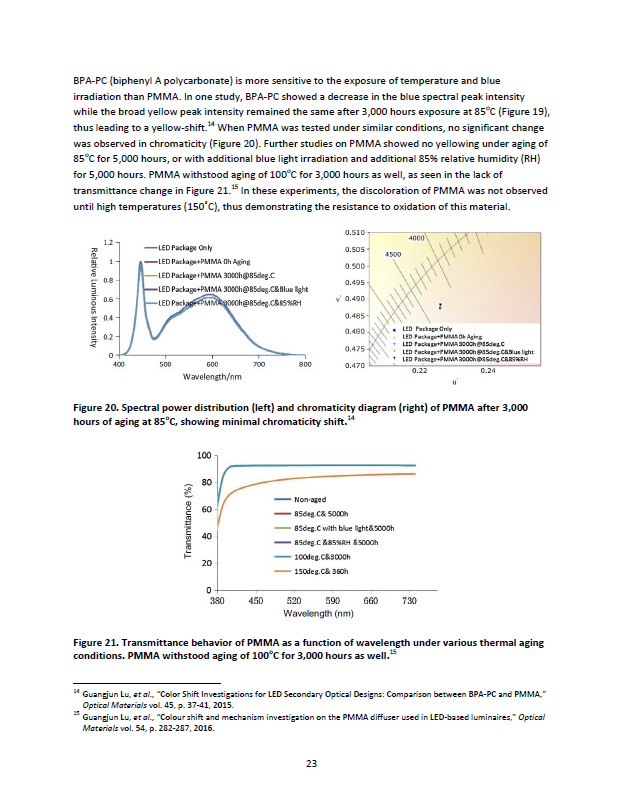 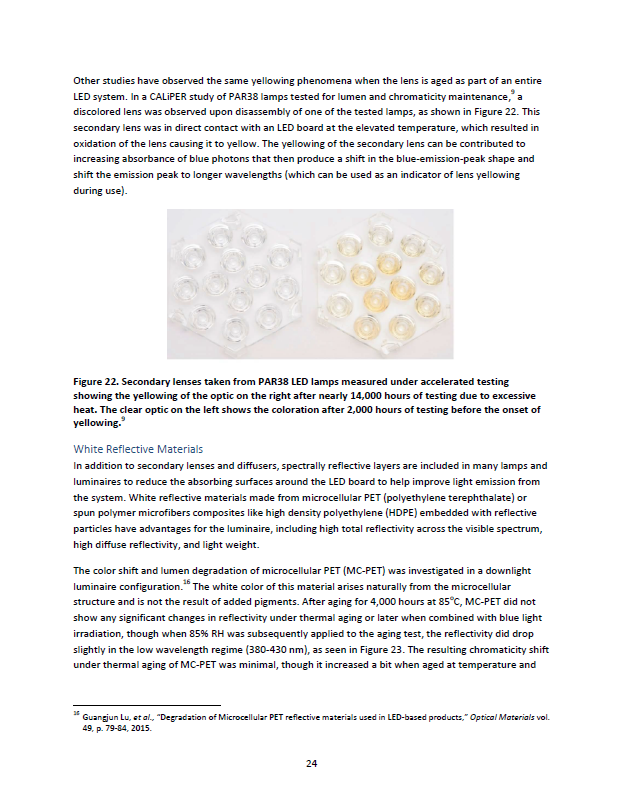 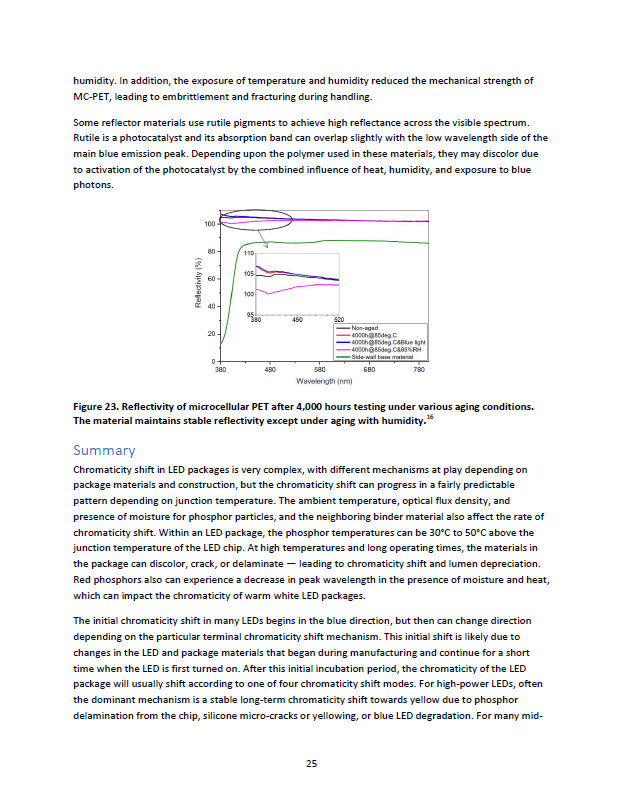 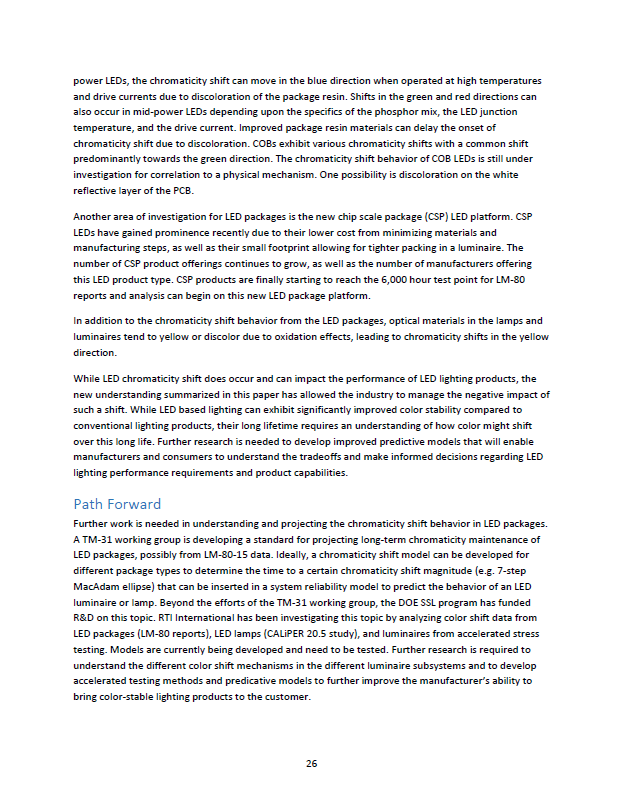 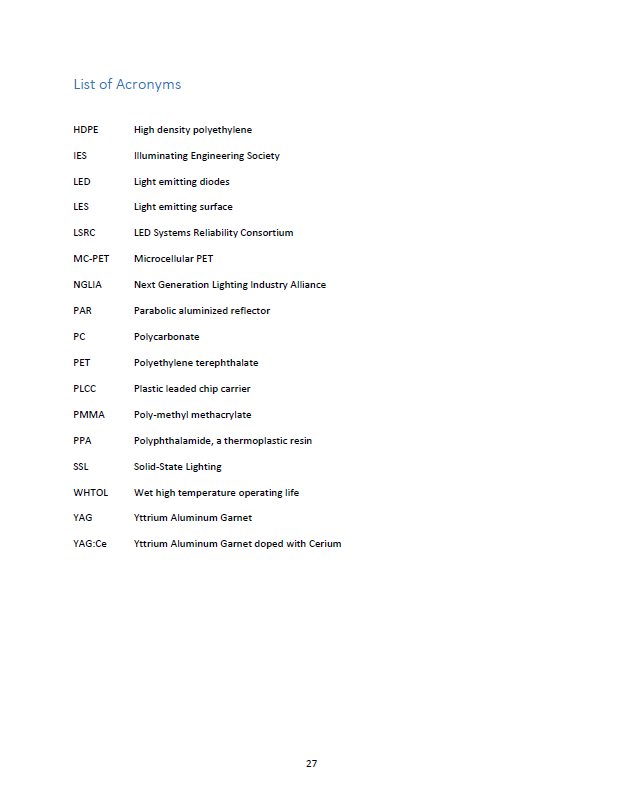