How to Leverage Tax Deductions with your Lighting Projects 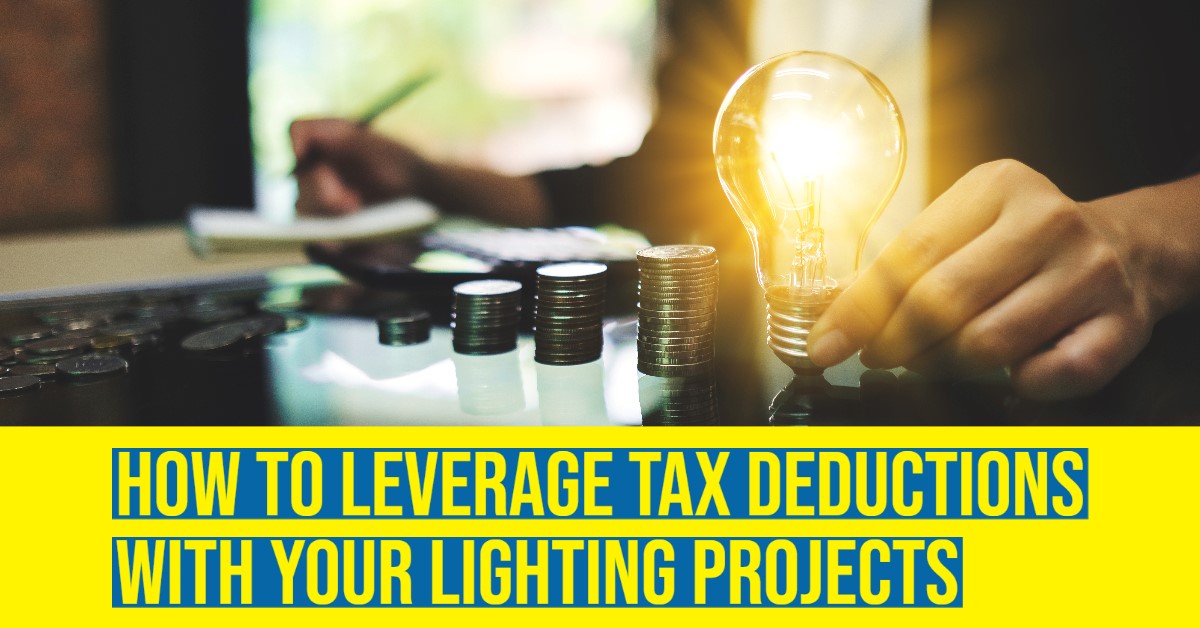 The Inflation Reduction Act of 2022 expands the Commercial Buildings Tax Deduction (CBTD, Section 179D of the tax code), allowing more projects to qualify for the energy efficiency incentive while increasing its potential value. This follows the CBTD finally being made permanent by the Consolidated Appropriations Act of 2021.

Created by the Energy Policy Act of 2005 and supported by industry groups such as NEMA and BOMA, the CBTD offers a financial incentive for building owners to invest in energy-efficient interior lighting, HVAC/hot water systems, and building envelope in commercial buildings.

The incentive takes the form of an accelerated tax deduction; instead of taking the deduction over a period of years as required by tax law, the entire amount can be taken in a single year, subject to a cap. This is expressed as a dollar amount per square foot earned by achieving satisfactory energy reductions compared to a reference building.

The CBTD has had a rocky history of expiring and then receiving temporary (and typically retroactive) reinstatement. A 2015 tax bill updated the reference building as being one that complied with the 2001 version of the ANSI/ASHARE/IES energy standard to the 2007 version, making qualifying for the incentive more difficult to achieve. The Consolidated Appropriations Act finally made the CBTD permanent and built in an inflation adjustment for the incentive, but it updated the benchmark again to the latest version of 90.1 as affirmed by the Secretary of the Treasury, which as of August 2022 reportedly had not yet happened.

In August 2022, President Biden signed the Inflation Reduction Act into law. This law includes amendments to 179D that expand the CBTD’s availability, reduce the required energy savings target, increase the size of the incentive, and make the incentive repeatable instead of a one-off.

The partial deduction, however, was eliminated, and unfortunately the Interim Lighting Rule, which had offered a simpler path for lighting retrofits that didn’t require building modeling, was also struck. On the plus side, however, a new retrofit path to the CBTD looks promising.

The new Section 179D amends the U.S. tax code to include the below provisions:

The Inflation Reduction Act instructed the Secretary of the Treasury to produce regulations detailing methods for calculating and verifying energy and power consumption, based on the California Nonresidential Alternative Calculation Method Approval Manual.

In the case of any (previously only public) tax-exempt entities, the law instructs the Secretary to produce regulations allowing the designer of the property to claim the CBTD in lieu of the owner.

The most recent of:

The incentive: The CBTD is calculated based on an Applicable Dollar Value (ADV).

If the prevailing wage and apprenticeship requirements are met, the ADV is higher: $2.50 per square foot for achieving a 25% savings compared the reference building, increasing $0.10/sq.ft. for every 1% of energy reduction beyond the 25% base up to a $5.00/sq.ft. maximum.

Previously, the CBTD could only be claimed once. The Inflation Reduction Act enables it to be claimed every three years for a commercial building and every four years for a building owned by a tax-exempt entity, as long as they fulfill the requirements stipulated in 179D.

Certification: The law requires the Secretary of the Treasury to detail how to certify projects for the CBTD, including specifying qualified software for modeling and qualified individuals who will determine compliance. Each certification must include an explanation to the owner of energy-efficient building features and projected annual energy costs.

Alternative deduction for retrofit projects: Retrofits can qualify by demonstrating a 25% decrease in energy use intensity (measured in BTU) compared to the pre-retrofit building.

A qualified retrofit plan is required, and the building must have been placed in service at least five years before producing this plan. The deduction must be taken in the year of final qualifying certification.

The role of lighting

With the elimination of the Interim Lighting Rule, lighting’s participation in the CBTD has become more complex, subject to a holistic approach requiring software-based building energy modeling.

Regardless of type of project, designers must be wary as with any energy efficiency incentive or goal to ensure the lighting performs its primary role of fostering a comfortable and productive visual environment. In short, energy savings should be evaluated carefully against the interests of good design and the needs of building occupants. The good news about lighting controls is options providing the most detailed and robust energy savings should not compromise lighting quality if properly designed and managed.

New construction and renovations: As “part of interior lighting” systems, permanently installed energy-efficient lighting of course is suitable for project inclusion and arguably lighting controls, wherever such equipment would be depreciable for tax purposes. Both are “part” of the interior lighting system and contribute to building energy savings, which is 179D’s legislative goal.

As a broad range of lighting control strategies are mandatory in these later versions of 90.1, designers can consider networked lighting controls to implement more advanced strategies such as institutional task tuning, reducing control zoning largely to the luminaire level, and highly detailed and robust sequences of operations.

Retrofits: For retrofits, it’s a whole different ballgame, as the reference building is the existing building and not 90.1, thereby making the 25% savings target potentially easier to achieve.

In this case, LED lighting and advanced controls can deliver strong energy savings, though lighting often will need to play a part in a holistic building upgrade, as the 25% target applies to the building.

The substantial size of plug loads in today’s commercial buildings provides an additional source of energy savings derived from lighting control systems able to control plug loads based on occupancy, schedule, or signal from another building system.

Overall, the new incarnation of the Commercial Buildings Tax Deduction offers a strong incentive to stretching energy efficiency in new buildings and modernizing existing buildings. In new buildings, it incentivizes more detailed design and the most advanced control options. In existing buildings, it incentivizes a wide range of lighting and advanced control options that, when coupled with available utility rebates, can substantially reduce initial cost that remains the largest inhibitor to investment in reducing operating costs via energy efficiency.